Everyone is welcome to attend the popular service, with doors opening at 4pm. The service lasts for just over an hour.

Please be seated by 5pm. We cannot guarantee admission after 5pm. Seats are unreserved and are on a first come first serve basis.

So said a local website advertising "things to do in York" last weekend, referring to the Advent Procession in the Minster.  Doors opening at 4pm for a service commencing at 5:15pm; seats first come, first served; admission not guaranteed after 5pm.  Such warnings are not exactly routine for Anglican acts of worship in England.

On Saturday past, the Daily Mail reported ahead of the Advent Procession in Salisbury Cathedral, held at 7pm on the eve of Advent and 5pm on Advent Sunday:

Around 1,700 worshippers queue for hours to see the beautiful spectacle.

The fact that the Advent Procession resonates in a culture routinely described and defined as 'secular' is worthy of some reflection.  This is a liturgy marked by carols, readings, and prayers - often concluding with Cranmer's majestic Advent collect - full of eschatological references.   In other words, a liturgy centred around the creedal confession of the Last Judgement - a theme which the past few generations of theology have sought to 'de-mythologise' and immanentize - has, quite literally, people queuing to get in.

Now, no, I am not suggesting that this is what actively, consciously draws people in such large numbers to the Advent Procession: but it does not, clearly, repel them.  Something about this liturgy, with its eschatological focus, a focus embodied in the contrast between light and darkness in the liturgy, resonates in a way that generations of demythologising theology denied could be possible in the secular city.

Comparison with the Nine Lessons and Carols is instructive.  Both contain weighty readings from Scripture.  Both employ hymnody traditional in form and content.  Both are centred upon dogmatic truths of the Creeds.  Both make use of the seasonal Prayer Book collects, which give prayerful expressions to those dogmatic truths. And both echo John Milbank's description of the coherence of the Anglican patrimony:

sturdily incarnated in land, parish ... yet sublimely aspiring in its verbal, musical and visual performances.

Both also emerged from the High Church tradition.  The Nine Lessons and Carols, of course, is associated with Edward White Benson and George Somerset Walpole.  Benson's son, Arthur, was to write that his father's preference was for liturgy "done in the most seemly way but without elaborate ritual".  He described his father administering the Sacrament as a priest:

there was nothing that could be called ritual, only a beautiful solemnity and decorum. He always wore a full long English surplice, and bands.

Similarly, when Walpole was elected Bishop of Edinburgh, The Times described him as "a moderate High Churchman".  If we wanted evidence of the vitality of the High Church tradition post-1833, we might well then point to the emergence of the Nine Lessons and Carols as perhaps the most popular and resonant Anglican liturgical act.  For while Ritualists were introducing Benediction in their parishes (a spirituality only ever appealing to a small minority), and Evangelicals were founding the Keswick Convention (likewise appealing to but a small minority), it was the High Church tradition which established the Nine Lessons and Carols as a popular means of celebrating and reflecting upon the Incarnation.

While the Advent Procession is a more recent development in Anglican liturgy, it is an expression of - to again use words from Milbank - the renewal in English cathedrals over recent decades of "High Church populist, festive and educational practices", contrasting with both Evangelical and Anglo-Catholic emphases. 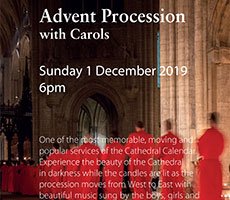 The High Church populism of the Advent Procession and the Nine Lessons and Carols is a significant reminder that two oft-repeated criticisms of the High Church tradition - that it is elitist and culturally irrelevant - are, to say the least, misrepresentations.  This populism, of course, sits very uneasily with those who (from a range of perspectives) promote a rather sectarian vision of the future of North Atlantic Anglicanism: smaller, purer, 'counter-cultural', purged of 'cultural Christianity' (as if it is possible for Christianity not to be embedded in culture).  The resonance of the Advent Procession and the Nine Lessons and Carols demonstrates that this need not be the Anglican future.  That, in fact, Anglicanism's historic vocation of gathering up and sanctifying cultural and social life can bear fruit, even in a secular age.  Of course, much more needs to be done - and needs to be done better, with greater confidence, and deeper (and more orthodox) theological conviction.  But an Anglicanism seeking resonance in a secular age needs the populist wisdom and practices of the High Church tradition.