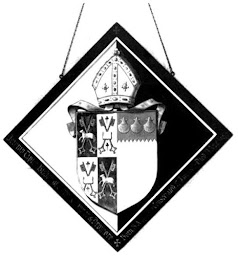 The call by evangelical Anglican blogger Psephizo for CofE bishops to "throw away their mitres" produced the expected online responses: Anglo-Catholic outrage at rejection of an expression of episcopal order and evangelical support for the well-known apostolic preference for chinos and open-neck shirt (St. Paul, of course, being known to dress like an accountant on a night out).
Perhaps the most tenuous of Psephizo's arguments is the suggestion that the mitre speaks of the episcopate as a high priestly order, "a piece of attire which communicates absolute authority and sacerdotal priestly ministry".  This, we are told, is because it reflects the turban worn by the high priest in the Old Testament.   It is odd for an evangelical Anglican to insist that mitres have an explicitly sacerdotal meaning: it is rather like those weird medieval readings of symbolic meaning in all parts of the liturgy.  My guess is that very few people indeed - mitre-wearing bishops included - are thinking of Exodus 28 when seeing - or donning - a mitre.  It is, rather, a commonly accepted sign of episcopal authority: hence its routine post-Reformation in the insignia of Anglican bishops.
Setting aside, then, the belief mitres are part of a sacerdotal conspiracy, what of the suggestion that they somehow symbolise a particular relationship between the bishop and the Holy Spirit?  In the words of Psephizo:
The modern revival of wearing of mitres by Church of England bishops signals in powerful terms ... that they are a group set apart. The bishop who ordained me believed that mitres were vital, because their flame-shaped outline symbolised the bishop as the dispenser of the Holy Spirit at confirmations and ordinations, something the liturgy actually contradicts: at no point does the bishop pronounce ‘I ordain you’, since the language is all about what God (and not the bishop) is doing and of course it is God who bestows the Spirit.
God, of course, bestows the Holy Spirit at Confirmation and Ordination.  The authoritative sign of this, however, is the laying on of episcopal hands.  In the words of the post-Confirmation prayer:
We make our humble supplications unto thee for these thy servants, upon whom (after the example of thy holy Apostles) we have now laid our hands, to certify them (by this sign) of thy favour and gracious goodness towards them.
As for Ordination, Hooker rightly points out that "neither Spirit nor spiritual authority may be thought to proceed" from bishops, who are "but delegates or assingees to give men possession of his graces" (LEP V.77.7).  The laying on of episcopal hands, however, is no empty gesture for there is in ordination "a real donation" of the Spirit (V.77.6).  He therefore insists that the words and "the hand which imposeth upon the function of our ministry" ensure that the ordained "is thereby forever warranted to have the Spirit with him and in him for his assistance, aid, countenance, and support in whatsoever he faithfully doth to discharge duty" (V.77.8).
This illustrates the most significant problem with Psephizo's critique of mitres.  He says that mitres "sit awkwardly with the Church of England’s reformed catholic understanding of ministry" - but that reformed catholic understanding of ministry is itself rejected by his critique.  We hear in his words the same contention of Hooker's opponents in their attack on the Ordinal:
The Holy Ghost, they say, we cannot give and therefore we foolishly bid men receive it (V.77.5).
I was both confirmed and ordained by bishops who did not wear mitres.  Neither they nor I, however, had any doubt that the laying on of hands by bishops in the apostolic succession was an authoritative sign of the gift of the Spirit, confirming me in the Christian life, bestowing on me the order of deacon and priest.  This belief was, to them and to me, simple, traditional Anglicanism.  To again quote Hooker:
the power of ordaining both Deacons and Presbyters, the power to give the power of order unto others, this also hath been peculiar unto Bishops ... The Apostles being Bishops at large, ordained everywhere Presbyters.  Titus and Timothy having received Episcopal power, as Apostolic ambassadors or legates, the one in Greece, the other in Ephesus, they both did by virtue thereof, likewise ordain throughout all Churches Deacons and Presbyters within the circuits allotted unto them (VII.6.3).
To explicitly name this as apostolic succession was no invention of the Oxford Movement.  Horsley (quoted in Mather's High Church Prophet) declared in 1803 of "the power of order":
Christ gave it first to the apostles; the apostles conveyed it to others; and those only who have derived it from the apostles in perpetual succession have power still to convey it.
Mitres are not required - and are certainly not "vital" - for this simple, traditional Anglican understanding of episcopal ministry.
This is, perhaps ironically, related to Psephizo's strongest argument against mitres:
On most people they just look daft - ill-fitting, unflattering and awkward.
This aesthetic critique reflects the historic Anglican concern for dignified simplicity and decent order, avoiding - in Cranmer's words - both an "excessive multitude of Ceremonies" and a hostility to those "Ceremonies which do Serve to a decent Order and godly Discipline".  The "ill-ftting, unflattering and awkward" mitre, put on and taken off throughout the liturgy, represents a fussy, distracting approach to liturgical ceremony which classical Anglicanism avoided.  By contrast, the rochet and chimere offer an unfussy and quietly dignified expression of episcopal order.
This is why the "reformed catholic understanding of ministry" embodied in the 1662 'Form of Ordaining or Consecrating of an Archbishop or Bishop' ensured that there was an appropriate ceremonial expression of the episcopal order and its functions:
After the Gospel, and the Nicene Creed, and the Sermon are ended, the elected Bishop (vested, with his Rochet) ... 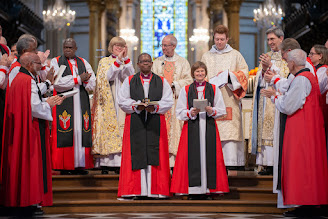 The rochet distinguishes bishops from presbyters and deacons, signifying the distinctive nature of "the work and ministry of a bishop". Psephizo's case against mitres, by contrast, reads at times like a case against a meaningful sense of episcopal order, and certainly as a rejection of a classical Anglican understanding of the episcopal order.  Arguing against a "sacerdotal priestly caste" stands entirely apart from the case for the episcopal order as an apostolic office, possessing the particular authority to ordain, in succession to the apostles, and the appropriateness of giving dignified ceremonial expression to this order.
It is right and proper that Anglicanism maintain a decent ceremonial which signifies the gift of episcopal order and its particular function within the Church's life and witness.  For this, the liturgical use of mitres is superfluous, not least because it is an unnecessary distraction which can overshadow the meaning of classical Anglican ceremony.
(The first illustration is the funeral hatchment of Jeremy Taylor, a perfect example of post-Reformation use of the mitre in episcopal coats-of-arms.)
-------------------
As I head off on retreat and then for a short late summer break, laudable Practice will return on 24th August.