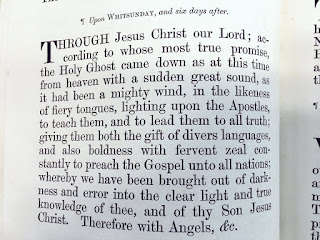 ... touching the frequency of the Communion, the Parson celebrates it, if not duly once a month, yet at least five or six times in the year; as, at Easter, Christmasse, Whitsuntide, afore and after Harvest, and the beginning of Lent.

George Hebert, A Priest to the Temple, or The Country Parson, Chpt. XXII.

The curate reported in 1682 that, in obedience to commands from the bishop, he had given notice before Whitsun communion, 'and to stir them up to their duty, I did read the second exhortation ...'.

Episcopal Visitation return, Parish of Caversham, Diocese of Oxford, 1683, quoted in Donald A. Spaeth, The Church in an Age of Danger: Parsons and Parishioners, 1660-1740.

I administer the Holy Sacrament of the Lords Supper the first Sunday in every Month, and also on the Usual Festivals, namely, Christmas, Easter, Whitsuntide.

I read prayers and adminstered the Holy Sacrament this morning at Weston Church being Whitsunday.

On Easter Day 1800, when there were only six communicants at St Paul's Cathedral, London, there were 311 in St Mary's, Kilkenny, where, the year before there had been 280 at Whitsun.

F.R. Bolton The Caroline Tradition in the Church of Ireland (p.170).

Over centuries, it was an established Anglican pattern: Whitsun was a 'Sacrament Sunday'.  Whatever our criticisms of the relative infrequency of the reception of the Sacrament in the Anglicanism of the 'long 18th century', what cannot be easily doubted is that this pattern was a means of identifying reception as a participation in the mysteries of the Faith celebrated at these feasts.

Contrasting this with contemporary Parish Communion practice brings us to a not insignificant question: which practice leads to a more devout reception of the Sacrament on Whitsunday, a more thankful recognition that in partaking of the Sacrament "Christ ... giveth by the same sacrament his holie spirit to sanctifie them as it sanctiefieth him which is theire head" (LEP V.67.7)?  As Thomas Comber wrote in his A Companion to the Altar (1675), meditating on the Whitsunday proper preface:

I will go to thy Altar O Lord with a New-Sacrifice of Praise, because thou hast given me a fresh instance of thy Love this day ... let me therefore together with thy precious Body, receive here such proportions of thy holy spirit ... that this may be a day of joy to me also.

The relationship between the feast and the reception of the Sacrament had also been a consistent, and rich, feature of Lancelot Andrewes's Whitsunday sermons:

Besides, it was one special end why the Sacrament itself was ordained, our comfort; the Church so telleth us, we so hear it read every time to us: 'He hath ordained these mysteries of His love and favour, to our great and endless comfort.' 'The Father will give you the Comforter.' Why He gives Him, we see; how He gives Him, we see not. The means for which He gives Him, is Christ--His entreaty by His word in prayer; by His flesh and blood in sacrifice, for His blood speaks, not His voice only. These means for which; and the very same, the means by which He gives the Comforter: by Christ the Word, and by Christ's body and blood, both. In tongues it came, but the tongue is not the instrument of speech only but of taste, we all know ...

This is sure: where His flesh and blood are, they are not 'spiritless,' they are not or without life, His Spirit is with them. Therefore was it ordained in those very elements, which have both of them a comfortable operation in the heart of man ... And all this to show that the same effect is wrought in the inward man by the holy mysteries, that is in the outward by the elements; that there the heart is 'established by grace,' and our soul endued with strength, and our conscience made light and cheerful, that it faint not, but evermore rejoice in His holy comfort (Whitsunday, 1610).

Note too how Andrewes here makes reference to the third Exhortation - "he hath instituted and ordained holy mysteries ... to our great and endless comfort" - while the curate from the 1682 Visitation in the Diocese of Oxford notes using the second Exhortation on the approach to Whitsunday.

The relationship between Whitsunday and reception of the Sacrament has, of course, been lost following the triumph of the Parish Communion movement.  To receive on Whitsunday is to do what happens every other Sunday.  And Whitsunday, therefore, becomes like every other Sunday, not marked by the particular preparation, penitence, and self-examination urged for a Sacrament Sunday.

Mindful of this, we might consider how this normative Anglican practice through the 'long 18th century' should be rescued from the condescension of posterity. (And we need to remember that the figure oft-quoted by Tractarians - 6 receiving Easter Communion in St Paul's, London, in 1800 - was far from typical, as the quote from Bolton demonstrates.)  As a pattern of eucharistic devotion and liturgical spirituality, it has strengths lost through routine weekly reception.  Half a century or so on from the triumph of the Parish Communion movement, it is time to assess the movement and whether the practice of weekly Eucharist as the main liturgy and the norm of weekly reception of the Sacrament has led to a strengthening of the Church's life.  Or, has it undermined sacramental devotion and flattened the liturgical year?

In other words, it might be time to reconsider the casual dismissal of that very traditional Anglican practice of, alongside monthly Eucharists, marking the great feasts with reception of the Sacrament.