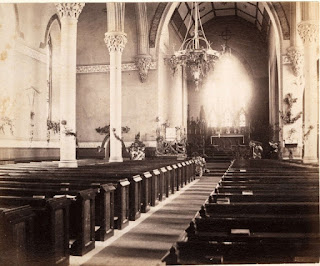 From James Beaven, A catechism on the Thirty-nine Articles of the Church of England: with additions and alterations adapting it to the Book of common prayer of the Protestant Episcopal Church in the United States (1855).

Beaven, a 19th Canadian representative of the Old High Church tradition, in a short but powerful phrase (echoing Taylor, "the spiritual presence of Christ is the most true, real, and effective"), defends the Old High Church account of the spiritual, not carnal, partaking of Christ in the Eucharist: again in Taylor's words, "that is, not to our mouths, but to our hearts".

Q. Is Christ then received in the Holy Sacrament?
He is verily and indeed "given, taken, and received by the faithful."
Q. What kind of receiving do you call this ?
A real, spiritual, not a carnal receiving.
Q. Would it be more real if it were carnal instead of spiritual?
No: spiritual things are more real than things which we see.

If we wanted an explanation of the lively, vibrant eucharistic devotion of the Old High Church tradition, it lies here: that the spiritual partaking of Ascended Lord in the Sacrament (the classical Reformed emphasis) is "more real"than a physical feeding.

(The photograph is of the interior of St Paul's Anglican Church, Kingston, Ontario, c.1880.)