"In love and charity with your neighbours": liturgical revision, community, and the Pax 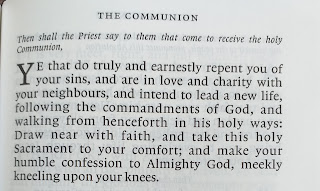 The most recent edition of New Directions - the magazine of Forward in Faith in the CofE - carries correspondence critical of the very fine Young Tractarians.  The criticism particularly focussed on being "wedded to sixteenth-century liturgy", with the correspondent declaring that both the BCP and the Tridentine Missal had "accretions" and "derogations" which detracted "from the integrity of the early eucharistic rites", until the reforms of the mid- and late-20th century.

What seems to be assumed here is that we have certainty about "the early eucharistic rites" when, in fact, this is not entirely the case.  To take one example invoked by the correspondent in criticism of the Tridentine rite, "the place of the Peace".  We know from St Augustine that the Peace in the Eucharistic rite of the Church in Hippo was not before the Eucharistic Prayer:

after the consecration is accomplished, we say the Lord's prayer, which you have received and given back. After that comes the greeting, Peace be with you, and Christians kiss one another with a holy kiss. It's a sign of peace (Sermon 227).

Not only is the place of the Pax in the Tridentine rite reflect that in the rite know to St Augustine and the church in Hippo, we might also wonder if a ritualised exchange of the Kiss of Peace between the sacred ministers and before the congregation might better embody the sacramental quality of the Pax known to Augustine:

After that comes Peace be with you; a great sacrament, the kiss of peace (Sermon 229).

Now the sharing of the Peace, of course, is not to be found in the BCP Holy Communion.  What is found in it, however, is an understanding of communal peace much closer to the Pax as understood by Augustine than is the case with the bourgeois bonhomie of the Peace in many contemporary Eucharistic celebrations.

The first Exhortation powerfully sets forth the meaning of the Pax in a Christian community:

And if ye shall perceive your offences to be such as are not only against God, but also against your neighbours; then ye shall reconcile yourselves unto them; being ready to make restitution and satisfaction, according to the uttermost of your powers, for all injuries and wrongs done by you to any other; and being likewise ready to forgive others that have offended you, as you would have forgiveness of your offences at God's hand.

The short Exhortation, always used, similarly declares that those coming to share in the Sacrament must live out the Pax of the Christian community: "in love and charity with your neighbours".  Related to this, of course, is the emphasis in the 1549/52/59/1662 rites on "alms for the Poor" at the offertory.  As Philip Anderson has shown in his excellent essay, this was an expression of the right-ordering of the commonwealth, an authentic manifestation of a community shaped and ordered by Pax.

The fact that BCP Holy Communion concludes with "The peace of God ... be amongst you and remain with you always" demonstrates the significance of the Pax to the rite and its social vision: deeper, more challenging, more profound than shaking hands with those around us on a Sunday morning.

It is, then, significantly closer to Augustine's understanding of the Peace than the rather banal contemporary practice:

what is indicated by the lips should happen in the conscience; that is, just as your lips approach the lips of your brothers or sisters, so your heart should not be withdrawn from theirs.

In other words, while contemporary liturgies have restored the ceremony of exchanging the Peace, it is without the depth of meaning and purpose evident in patristic practice and retained by the BCP's robust understanding of the relationship between Sacrament and communal Pax.  The 'restoration' of the Peace becomes anything but a renewal of patristic practice, being, instead, a rather sickly, pale imitation - a jolly (or, as is often the case, somewhat embarrassed) congregational celebration rather than an embodiment of the Pax to be lived out in a manner which re-orders communal (and not merely congregational) living, relationships, and practices. 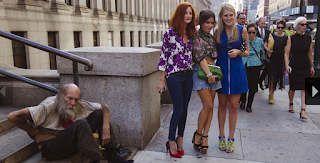 Both BCP and Tridentine rite, then, draw out the meaning of the patristic practice in ways lost and obscured in contemporary liturgical practice.   The question asked of "sixteenth century liturgy" by the correspondent in New Directions - "Is this sort of stuff really a help to catholic Christians in the twenty-first century?" - ironically exposes the shallowness of the contemporary practice amidst a cultural and political context in which there is a significant desire for a more compelling vision of Pax than that offered by bourgeois bonhomie.  It is a question, then, which leads us back to richer liturgical sources and deeper practices.