"Just measures of religious prudence and discretion": A Hackney Phalanx sermon for the Fifteenth Sunday after Trinity 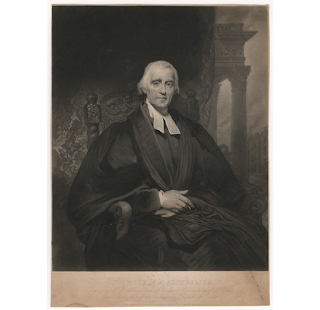 From A Course of Sermons, for the Lord's Day throughout the Year, Volume II (1817) by Joseph Holden Pott - associated with the Hackney Phalanx - an extract from a sermon for the Fifteenth Sunday after Trinity. Based on the text Jeremiah 35:18-19, "because ye have obeyed the commandment of Jonadab, your father, and kept all his precepts, and done according to all that he hath commanded you", the sermon challenges a demand for the ascetic practices of "self- inflicted rigour": it is, then, another Old High rejection of 'the Weird'.  This, as Nockles notes, was an Old High-Tractarian point of contention, the latter encouraging a fashion for ascetical excess. This suspicion in Old High piety regarding ascetic demands also ensures that no supposed spiritual 'elite' is countenanced. Instead, the Christian life is defined by the "ordinary path of faith and duty". It is this which underpins a particularly attractive aspect of Old High piety: its understanding of the goodness of domestic and communal life, of the created order and its fruits, to be received with joyful gratitude.

To cut off the use of lawful things by violent restrictions, to bind that which God hath left free, to prefer the narrow bondage of the chain and fetter, to the just measures of religious prudence and discretion; such sacrifices form no parts of man's reasonable service, nor will they advance his progress in pursuing the best attainments, of which his spiritual nature is made capable. Where God hath left things to be taken or rejected, according to the circumstances which may render them advisable or not, it is little less than folly, it is both presumptuous and vain, to attempt to provide better for our welfare, by renouncing that liberty, with which he hath invested us. God hath called us to exercise, in a reasonable and becoming manner, the privilege of choosing or refusing such things, as our necessities may dictate, or our advantage may require.

Where the matters of our choice are in their own nature indifferent, it is a rash thing to frame new trials out of them, to make them the subjects of offence, and to render it a crime to use them in any manner or degree; and where God has really designed a beneſit in any gift of his hand, it is still more perverse to debar ourselves from that which may minister to our good, and which may supply the opportunities for a temperate and thankful use, which is much more noble and becoming, than a superstitious and constrained forbearance. Perpetual denials cannot be always seasonable; they must cease in such case to be significant, even when the season might otherwise demand them with propriety, and require them for some special reasons and considerations. It is an ill-judged and a fond thing, to attempt a fancied measure of improvement in the rules of duty, and to endeavour to frame laws and methods of obedience for ourselves, which Providence has not designed for us; to bind ourselves by covenants, which have no seal or warrant, but that of our own humour, which may prove snares to us in our course through life, and may put real difficulties in our way.

True religion does not consist in such fanciful and arbitrary practices, nor does it encourage us to take up needless obligations. When inventions of this nature come to be valued as high points of perfection, they nourish a conceited singularity, and they serve but little to the growth of any one good quality of mind or temper. Do but regard the nature of the Christian's reasonable service, according to the lessons of his great Guide and Instructor, and you will find how little stress is laid upon such nice and scrupulous observances. You will find that the true religion consists in the best improvement of which the character of man is capable; it consists in humbleness of mind, in charitable dispositions, in faith and holiness, in sobriety of life, and upright dealing; it consists in undissembled piety toward God, in the thankful recollection of his goodness, and, above all, in regard to his covenanted mercies; it consists in various services, according to due time and manner; it consists in restraints indeed, but not such as respect the body only, but the mind and inclinations; it consists, therefore, in moderate desires: and who shall suggest retrenchments, where such boundaries are fixed?