"The last of the Solemnity of this Season": Caroline, Restoration, and Revolution era preaching on the Epiphany 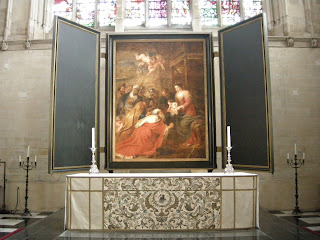 Sermons from the Caroline, Restoration, and Revolution eras suggest a lively Epiphany piety within the Church of England, with the significance of the feast as the culmination of Christmas recognised and traditional Epiphany themes echoed.

In a 'Sermon concerning the Epiphany', preached in Christ Church, Oxford, in 1639, Richard Gardyner (deprived during the Interregnum) encouraged his listeners to adore with the Magi:

But let us, who acknowledge Christ our Liege Prince, and Sovereign, like good subjects humbly seek, & come to this God Incarnate, falling down at the Manger, and at the lap of the Virgin, where this blessed Child lieth ... and there behold him given to us, borne for us, sucking, growing, dying, rising again, ascending above the heavens that he may at length bring us thither, where we shall see him face to face, which we beseech him to grant us for his mercies, and merits sake.

In doing so, he notes that he is in disagreement with Calvin's understanding of Saint Matthew's account of the adoration of the Magi:

And here I must take leave to vary from Calvin's exposition, the current of Antiquity being against it. He would have the Worship in this place tender'd, not to be an act of Religion, but Civility.

At the conclusion of the sermon, however, he notes "Luther's zealous exhortation" to imitate the adoration of the Magi, a reminder that a traditional Epiphany piety could be retained in a Reformation context.

In a collection of sermons published in 1672 after his death - and thereby influencing preaching in the Restoration Church - an Epiphany sermon by Mark Frank explicitly invokes patristic interpretations of the gifts of the Magi, "seeing the Fathers have led the way":

Here's his Birth, his Life, his Death, and Resurrection all acknowledged. His Birth fitly resembled unto gold, the purest metal; his birth the purest without any sin at all, of a Virgin pure as the most refined Gold; his Life well represented by the Incense, being nothing but a continual service of God, and a perpetual doing of his Father's business. His Death, the very manner of it evidently pointed at by the Myrrh, which in his Passion was given him in Wine to drink: the usual draught of those that died upon the Cross. And his Resurrection, easily enough understood by the same Myrrh, whose chief use is to preserve the dead body from Corruption, out of an hope of a Resurrection; and was even literally done unto him by Nicodemus, who brought a mixture of Myrrh and Aloes to embalm him. So now we see what it is to present Gold, Frankincense, and Myrrh to Christ, even no less than to believe him to be God and Man, our King, and Priest, and Prophet, born of a Virgin, without stain of sin, living in all holiness without blame, and dying for us; yet not seeing Corruption, but rising again to Incorruption.

It is again worth noting that this contrasts with Calvin's rejection of the traditional reading of the gifts offered by the Magi:

Almost all the commentators indulge in speculations about those gifts, as denoting the kingdom, priesthood, and burial of Christ. They make gold the symbol of his kingdom, - frankincense, of his priesthoods, - and myrrh, of his burial. I see no solid ground for such an opinion.

Again a contrast can be made with Luther's preaching, which freely invoked the traditional reading, saying, for example, of the gift of myrrh:

Another notable feature of Frank's Epiphany sermons are references to winter.  His Third Sermon notes the Magi undertaking their journey "in the depth of Winter", while the First Sermon may echo the famous words of Lancelot Andrewes' 1622 sermon:

the cold and hardness of a deep Winter season, the hazzard and inconvenience of so long, so hard, so unseasonable, so dangerous, and I may say so uncertain a Journey.

This is another example of the maintenance of an evocative traditional Epiphany piety, also evident in the Jacobean Church.

Finally, Francis Hare's sermon preached on the Epiphany in 1700 pointed to "the abundant reason to celebrate this Day", evidence of the traditional understanding of the feast seen in the Caroline and Restoration eras continuing after the Revolution:

This is a Day much to be remembered in itself; and as 'tis the last of the Solemnity of this Season, so is it the great Reason we remembered those that went before it: For what if Christ were in the fullness of Time Born of a pure Virgin, what if he were Circumcised the Eight day, and made obedient to the Law; what had these things been to us, or what Interest had we had in them, if He that was Born and Circumcised, had not been Manifested to us?

This robust affirmation of the significance of celebrating the Epiphany can be contrasted with the failure of the Second Helvetic Confession to mention the Lord's Epiphany in its acceptance of certain feasts: "if in Christian liberty the churches religiously celebrate the memory of the Lord's nativity, circumcision, passion, resurrection, and of his ascension into heaven, and the sending of the Holy Spirit upon his disciples, we approve of it highly".   The obvious comparison is with the lively Epiphany observance - liturgical and cultural - in the Lutheran lands.

Mindful that the Book of Common Prayer reiterated the traditional Western emphasis on the Epiphany as 'The Manifestation of Christ to the Gentiles', Hare celebrated this emphasis:

the Day which the Church hath set apart to commemorate that great Mystery, the Manifestation of the Messiah to the Gentiles, a Mystery hid from Ages and Generations, but now made known in the Persons of the Wise Men; who by the Leading of a Star came from the East to Jerusalem to pay their homage to the New-born King: For they were the First-fruits of the Gentiles; in Them was this Manifestation, not only signified and shadowed forth, but actually begun; so soon did the Messiah the Glory of Israel begin to be a Light to the Gentiles also.

It was an emphasis also found in Luther's preaching on Epiphany:

the events themselves are glorious, especially the one we commemorate today, the manifestation of Christ to the wise men of the East. For here the Lord desires to reveal Himself to the Gentiles also.

A traditional Epiphany piety, sharing much in common with Lutheran observance, maintaining patristic interpretations, and celebrating the feast as the culmination of the Twelve Days: Epiphany preaching in the Caroline and Restoration eras and beyond offers evidence of a rich and lively observance of the feast. 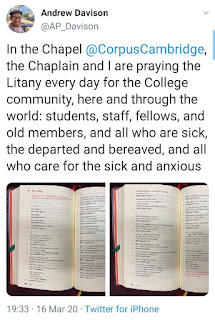