"The Apostolic origin of this rite": Hobart's 1816 Confirmation sermon 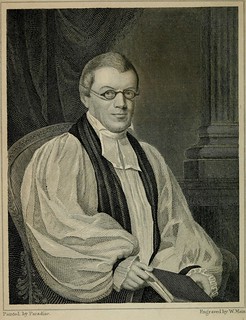 Another fine example of the classical Anglican theology of Confirmation is found in Bishop Hobart's 'A Sermon explaining the order of Confirmation' (published in 1816: Hobart was Bishop of the Diocese of New York). Hobart, indeed, quoted from Secker's sermon, referring to "the words of a prelate whose pastoral fidelity and zeal are still fresh in the memory of the Church which he adorned by his virtues, and benefited by his talents and labours".

The sermon opened by placing the Episcopalian rite of Confirmation as an expression of the "highest moderation and wisdom" which had shaped the Church of England's Reformation:

And, not to multiply instances of her wisdom and her moderation - she did not deprive the members of her fold of the benefit of the ordinance of Confirmation, because papal superstition had defaced the simplicity of this rite ; for she found that in the first and purest ages of the Church, the "laying on of hands" was received as among the "principles of the doctrine of Christ", the mean to the devout Christian of renewed supplies of grace, and the pledge of the love and favour of God.

This was a significant aspect of the classical Anglican teaching on Confirmation, the conviction that this apostolic rite embodied the apostolic claims of the Church of England.  Related to this, Hobart repeated the well-established emphasis on Acts 8:17 and the experience of the gift of the Holy Spirit in the apostolic church:

The Apostolic origin of this rite is traced to the instance recorded in the Acts of the Apostles, where Peter and John, laid hands on the Samaritan converts who had been baptized by Philip the Deacon, and "they received the Holy Ghost". It has been already proved, that "the laying on of hands", being ranked among "the principles of the doctrine of Christ", must refer to some rite necessary for all Christians. Hence it results, that not the miraculous gifts of the Holy Ghost alone accompanied the imposition of hands on the Samaritan converts; for these gifts were not essential to all Christians. There is no reason, indeed, to suppose that miraculous gifts were universal. The contrary is the probable opinion, and is generally entertained by judicious divines of all të denominations. If, then, the miraculous gifts of of the Holy Spirit were not common to all Christians, there would be absurdity in the supposition, that the Samaritan converts were particularly distinguished, and that they all received these gifts. They all, however, received the Holy Ghost. His ordinary grace, therefore, that which is necessary to enlighten and aid Christians in the spiritual life, must have accompanied the imposition of hands. And this grace being necessary for Christians in every age, the ordinance, which, by the power of God, who can render efficacious the most humble institutions, is made the merciful mean and pledge of conveying and assuring.

The relationship between Baptism and Confirmation is also expounded in a manner which demonstrates how the rite is an expression of the pastoral concern of an Anglicanism which robustly rejected the experiences of 'enthusiasm' while also recognising the importance of the vocation to 'holy living':

But neither did the Apostles, nor does our Church, consider baptismal regeneration as availing to final salvation without the renewing of the Holy Ghost. The Apostles, in their epistles, consider Christians as elected, into a state of salvation, and then exhort them to  make their calling and election sure". "Ye are washed, ye are justified, ye are sanctified", is their language to whole bodies of Christians. They are thus considered as "justified" in baptism, that is, put into a state of conditional favour with God; and are then exhorted to walk worthy of their holy vocation ... Thus sanctioned by scriptural authority, our Church distinguishes between Regeneration, or the change of our spiritual state; and Renovation, or the change of heart and life.

Hobart maintains the classical Anglican balance of, on the one hand, respect for the laying on of episcopal hands after the apostolic example, while on the other, reminding candidates not to stay at this sign, but that they are to "looking to God for that spirit which is his gift alone":

After offering these solemn invocations, which are derived in great part from the offices of the primitive ages, the Church proceeds, by the imposition of the hands of the Bishop, to certify them of "God's favour and goodness to them".

Imposition of hands, the ancient ceremony of benediction, has the sanction of Apostolic practice, and is the only ceremony employed by our Church in Confirmation. The Church of Rome, however, has laid aside this rite, and has introduced others ... and the latter not being significant or dignified , were laid aside by our Church, and the Apostolic ceremony is alone retained. Our Church makes the first order of the ministry, the Bishops, the agents in laying on of hands. In this she follows the practice of the primitive and universal Church; and is warranted by the authority of Scriptures for though Philip the Deacon baptized the Samaritans, Peter and John, of the first order of the ministry, "came and laid hands on them, and they received the Holy Ghost".

Finally, in another emphasis derived from the characteristically Anglican concern for the 'ordinary' quality and progress of the Christian life, the gift of the Holy Spirit in Confirmation is found not in the dramatic:

It has been before proved, that the due administration of this rite is accompanied by: the gift of God's Holy Spirit, as that invisible, but quickening, enlightening, and sanctifying agent by which the spiritual life is preserved and strengthened. That those holy graces and virtues which are the evidences of his presence, do not always appear, must be ascribed not to any failure of God's promise, but to the unworthiness, or the neglect of those who receive these ordinances, which are the means and pledges of his gracious influence. He is given, not to work in us irresistibly, but by moral motives and aids. If we do not, by sinful indulgences, or by indifference, or negligence, resist his grace, it will be effectual in our daily victory over sin and temptation, and in our daily progress in all the virtues and consolations of the Christian life.

What needs to be remembered when reading Hobart's sermon is the fact that in 1816 Confirmation was a relatively new rite in the experience of Episcopalians in the United States - and of Anglicans in what would become Canada.  It had not been part of the life of the Church of England in the pre-1783 colonies due, of course, to the absence of resident bishops.  Confirmation only became a part of Episcopalian and Anglican life in North America with the consecration of Seabury in 1784 and of White and Provoost in 1787, and of Charles Inglis in 1787.  That it quickly became an established part of Episcopalianism in the United States and Anglicanism in Canada must surely be due, at least in part, to the coherent, robust theology of Confirmation - inherited from the Church of England - which was used to explain and defend the rite in these contexts.  The lessons that we might learn from the strength of that theology will be considered in Friday's post.