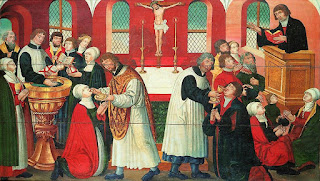 Yesterday was the commemoration in the calendar of The Episcopal Church of the consecration of Samuel Seabury.  Seabury's consecration, however, was not generally regarded by Episcopalians in the newly-founded United States of America as securing an episcopate for their churches: outside of New England, Episcopalians continued to seek an episcopate by means of bishops of the Church of England.  This was delayed as parliamentary legislation was required to exempt such candidates for an American episcopacy from taking the required oath to the Crown.

During that delay, Bishop White's Memoirs of the Protestant Episcopal Church in the United States of America notes that John Adams, then ambassador of the United States to Great Britain, began to consider an alternative means of securing holy orders for a number of "young gentlemen" from the United States then in London seeking orders from the Bishop of London:

Mr. Adams, then the minister of the United States at the court of St. James, being in company with M . de St. Saphorin, the minister of the crown of Denmark, mentioned to him the case here stated, of the candidates for orders, with a view to his opinion, whether they could be gratified in the kingdom which he represented. Some time after, the Danish minister made a communication to the American, from which it appeared, that the inquiry of the latter had been notified to the Danish court; that the consequence had been a reference to the theological faculty of the kingdom; and that they had declared their readiness to ordain candidates from America, on the condition of their signing of the thirty-nine Articles of the Church of England, with the exception of the political parts of them; the service to be performed in Latin, in accommodation to the candidates, who might be supposed unacquainted with the language of the country. This conduct is here the more cheerfully mentioned to the honour of the Danish Church, as it is reasonable to presume, that there would have been an equal readiness to the consecrating of bishops, had necessity required a recourse for it to any other source than the English Episcopacy, under which the American churches had been planted.

The Danish ambassador had communicated to Adams the theological judgement of the Church of Denmark, "upon the subject of conferring holy orders agreeably to the principles of the Church of England":

The opinion of the theological faculty having been taken on the question made to your excellency by Mr. Adams, if the American ministers of the Church of England can be consecrated here by a bishop of the Danish Church? I am ordered by the king to authorize you to answer, that such an act can take place according to the Danish rites; but for the convenience of the Americans who are supposed not to know the Danish language, the Latin language will be made use of on the occasion; for the rest, nothing will be exacted from the candidates, but a profession conformable to the articles of the English Church, omitting the oath called test, which prevents their being ordained by the English bishops.

Without engaging in what would be, admittedly, a very interesting counter-factual, it is worth noting two aspects of this strange tale.  The first is that the willingness of the Danish bishops to bestow holy orders on American Episcopalians provides both an echo of Laud's ambition for a 'Union of Churches of the Northern Kingdoms' and an anticipation of the Porvoo Communion.  The second is that American Episcopalians seeking orders from Danish bishops would have been required to subscribe to the Articles of Religion, suggesting that the Church of Denmark did not view the Articles as a confession hostile to or incompatible with the Augsburg Confession.

It was, of course, a path not taken.  As White notes, "there was no idea of having recourse, in the first instance, to any other quarter than that of the English Episcopacy".  That said, it is a fascinating and suggestive insight into late 18th century Anglican-Lutheran relations, reflecting what had gone before and pointing to what would come to pass in the deepened communion between the two traditions in the late 20th and early 21st centuries.