Review: James David Smith 'The Eucharistic Doctrine of The Later Nonjurors: A Revisionist View of the Eighteenth-Century Usages Controversy' 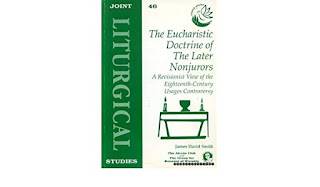 It is important to keep in mind that the Usagers and non-Usagers held different views of the Eucharist (p.15).

These words lie at the heart of the view proposed by James David Smith in The Eucharistic Doctrine of The Later Nonjurors: A Revisionist View of the Eighteenth-Century Usages Controversy (2000).  Smith suggests that while the non-Usagers held to a "dynamic receptionist interpretation" which was "the dominant High Church eucharistic doctrine", the Usagers were adherents to a minority school in the High Church tradition - Virtualism - which he (somewhat confusingly) terms 'Sacramentarian' (p.37):

The Usagers connected the eucharistic presence much more closely to the elements than did the non-Usagers (p.37);

The Usagers believed that ... the eucharist was a proper sacrifice (p.28).

Firstly, let us consider Smith's suggestion that Usagers and non-Usagers held different understandings of the eucharistic sacrifice.  At one level it would seem so, as the Usagers insisted on the necessity of an oblation in the Prayer of Consecration, after the manner of 1549.  This, however, was rejected by the Usagers, not because they denied an understanding of eucharistic sacrifice, but because they regarded the 1662 rite as giving expression to such an understanding.  Smith himself points to this, describing the Usagers as believing in the eucharist as "a commemorative sacrifice" (p.26), before going on to describe the non-Usager perspective in very similar terms:

Such language, of course, had long been part of the High Church tradition.  Thus, for example, Jeremy Taylor:

When the Usager Collier initiated the Controversy in 1718 with his Reasons for restoring some Prayers and Directions, his account of the eucharistic sacrifice was no different to that given by Taylor:

our Blessed saviour at his last Supper, offered the Bread and Wine to God the Father, as the Symbols of his Body and Blood, and commanded his Apostles to do the same.

this Truth is not contested amongst us.

Therefore I am of opinion, that our reformers have fixed our prayer of oblation in its proper place; for these words respet the whole foregoing eucharistical service, which we, in that suitable prayer, properly, in the post-communion, beseech our good God, graciously to accept of (p.30).

What, then, of the eucharistic presence?  While the "dynamic receptionism" - the majority view in the High Church tradition - does certainly seem to been prevalent amongst the non-Usagers, Virtualist discourse was also present, as seen in the words of Nathaniel Spinckes:

... the Bread and Wine still retain their own Nature, and are only spiritually, virtually, and sacramentally our Saviour's Body and Blood ... Now that it is no more common Bread, sufficiently intimates it to be the Bread still, tho' not as it was before; and that it consists of two things shews that it still retains its earthly Nature of Bread, though it has withal a heavenly Virtue and Efficacy added to it - The Article of the Romish Transubstantiation, Inquired into, and disproved (1719).

Such Virtualist language is very similar indeed to the Usager Brett, quoted by Smith:

I believe [the consecrated elements] to be his sacramental flesh and blood, that is ... his very body and blood in power and effect (p.23).

It is also worth comparing Spinckes with Collier's language in the opening salvo of the Controversy, defending the epiclesis:

the Prayer for the Descent of the Holy-Ghost was made for transfusing the mystick Virtue upon the Elements, and giving them the Efficacy of the Institution.

Even when it came to non-Usager language which seems to articulate Receptionist concerns, there is not necessarily an obvious division.  Smith quotes the non-Usager Walker referring to the elements as "the perfect representatives of his body and blood", and goes on to state:

Such language, however, was not to be found amongst only non-Usagers.  Smith also quotes the Usager Brett declaring of the elements that they are "the full and perfect representative of his body and blood" (p.23).  In a way, this should not entirely surprising.  While High Church Receptionists and Virtualists did have disagreements and debates, they shared an essentially Reformed, Augustinian understanding of how the gift of Christ's Body and Blood was received in the Holy Sacrament.  As Nockles notes, Virtualists and Receptionists held much in common:

In asserting a 'heavenly' Real Presence, the advocates of receptionism were at one with the virtualists.  According to both views, the bread and wine were set aside for a new purpose by means of consecration while not altering in nature or substance.  The main difference was that receptionism attached less instrumental efficacy or virtue to the eucharistic symbols than did virtualist doctrine.

Put simply, Smith's conclusion that the Usagers and non-Usagers "held distinct eucharistic doctrines" (p.36) cannot be easily seen regarding either the eucharistic sacrifice or the eucharistic presence.  Both Usagers and non-Usagers were "doctrinally continuous" with the High Church tradition.  What is more, for Smith to claim that the Usagers had "the courage to disregard the need for any liturgical continuity with the Reformation Church of England" (p.37) is very odd considering that the Usager project was, in the words of Collier's opening pamphlet, 'restoring some prayers and directions as they stand in the Communion Service of the first English Reformed Liturgy'.  Reverence for "our First Reform'd Communion Office" sits uneasily beside any claim that the Usagers rejected "the need for any liturgical continuity" with the Reformed ecclesia Anglicana.

This might also lead us to question Smith's focus on the Usagers.  The stance taken by the Usagers - insisting on the necessity of the four 'usages' - bitterly divided the already marginal and ineffective Non-juror communities and did so despite, as Smith admits, "the non-Usagers [being] the majority party amongst the priests and laity" (p.40).  By contrast, the non-Usager defence of the 1662 rite reflected the eucharistic teaching, practice, and piety of the influential High Church tradition, of much greater significance than the esoteric Usager communities.  Here we find the the most important aspect of the Non-juror movement: not the absurdly irrelevant Usagers, but the non-Usagers defending the integrity of the 1662 rite and thus the teaching and piety associated with it which nurtured Anglicans over centuries.

Perhaps this is the truly revisionist stance: that despite the focus placed on the Usagers by Anglo-catholics and promoters of liturgical revision, it is the non-Usagers to whom we should be attending, heeding their exposition and defence of a liturgy which sustained a vibrant High Church culture of eucharistic teaching and piety throughout the 'long' eighteenth-century and beyond, a liturgy which remains a defining source for the renewal of contemporary Anglican sacramental teaching and piety.