"A life which is hidden": the gift of 'A Prayer for the Clergy and People' 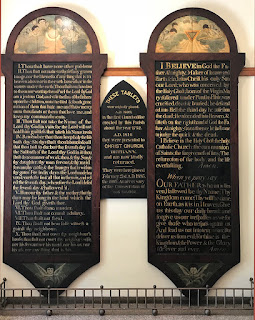 One of the joys of the Prayer Book tradition, of Common Prayer, is discovering or rediscovering a prayer contained within it which resonates in a particular manner.  For me, this has recently been the case with rediscovery of 'A Prayer for the Clergy and People', at the end of 1662 Mattins and Evensong:


Almighty and everlasting God, who alone workest great marvels: Send down upon our Bishops, and Curates, and all Congregations committed to their charge, the healthful Spirit of thy grace; and that they may truly please thee, pour upon them the continual dew of thy blessing. Grant this, O Lord, for the honour of our Advocate and Mediator, Jesus Christ

It is, of course, usually omitted, regarded as part of the unnecessary material at the conclusion of the offices, and as antiquated as the two preceding prayers for the Queen and Royal Family.  We might, however, want to pause at this point.  The state prayers at Mattins and Evensong in the Prayer Book tradition give expression to the Church's vision of the common good, embodied in the Monarch or office of the President.  In an era when an understanding of the common good is being eroded, renewing the use of the state prayers may be a means of giving expression to the rich tradition of Anglican political theology and its contemporary significance.

A not dissimilar significance is to be found in 'A Prayer for the Clergy and People'.  It can be a means of renewing our vision of the Church's life.  Consider those opening words, "who alone workest great marvels".  Where are these marvels to be encountered?  They are to be encountered in the Church's life, through the ministry of Word and Sacrament: "our Bishops, and Curates, and all congregations committed to their charge".  Here - in phrases from the prayer - is the presence of the Spirit, the gift of grace, the bestowal of blessing.

The prayer holds together the visible and invisible natures of the Church's life.  The visible nature of congregation and ministry of Word and Sacrament; the invisible reality of Word and Sacrament drawing us into and renewing us in communion with the Holy Trinity.  We see the ordinary parish church, the parson, Bible on the lectern, water, bread and wine.  But, in heart and soul, we encounter "great marvels":

hear, and receive thy holy Word;

it hath pleased thee to regenerate this infant with thy Holy Spirit;

and feed on him in thy heart by faith with thanksgiving.

There is another way in which the prayer unfolds the Church's invisible nature: the use of the term "Curates".  In PECUSA 1789 - and in much informal revision of 1662 when the prayer is used - this became "and other Clergy", reflecting changing popular usage.    As, however, with the Prayer for the Church Militant in the Communion Office, "Curates" speaks of the heart of the ministry of priests, the cure of souls.  This is reflected in the form for the Ordering of Priests, with candidates charged to teach and serve those "within your cures".  Here is the invisible, ghostly, spiritual reality that animates and gives meaning to the priest preaching and administering the sacraments, catechising and ministering to the sick and dying, absolving and blessing.

In his An Essay on the Church, William Jones of Nayland (1726-1800) - one of the great 18th century High Church theologians - reflected on this relationship between the Church's visible and invisible natures:

Farther enquiry will shew us that the Church is no confused multitude of people, independent of one another, and subject to no common rules: but a regular society, like to other societies, in some respects, and unlike them all in others. It is called a body, a family, a city, a kingdom. A body is a regular structure, the limbs of which being joined together, are subordinate and subservient to one another, and are animated by the same soul or spirit. So saith the Apostle, for by one spirit we are all baptized into one body. 1 Cor. xii. 13. It being also called a family, the members of it must have some common relation to one another: being called a city, it must be incorporated under some common laws and being a kingdom, it must have some form of government and magistracy. Families, cities, and kingdoms are societies; and the Church, being represented by them, must be a regular society. But in this the Church differs from all other societies, because they belong to this world, and their rights and privileges are confined to it; whereas the Church extends to both worlds, the visible and the invisible, and is partly on earth, and partly in Heaven, In its earthly members it is visible; in its rulers, it is visible; in its worship, it is visible; in its sacraments, it is visible. But being also a spiritual society, it hath a life which is hidden, and in the inward and spiritual Grace of all its outward ordinances it is invisible.

As with Jones of Nayland, 'A Prayer for the Clergy and People' holds together the Church's visible and invisible realities.  The oft-times prosaic reality of congregation and parson are united - without confusion, division, or separation - to the "great marvels" of "a life which is hidden".

Such is the gift of this prayer.  It sets before us a vision, at once realistic and rich, of the life of the congregation, of the ministry of Word and Sacrament, of the Curate's preaching and administration of the sacraments, that here in these ordinary, commonplace experiences "great marvels" are encountered in heart and soul.