A President's funeral: there is no secular 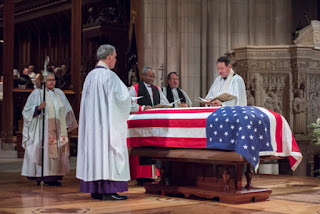 Let us now praise famous men, and our fathers that begat us ... Such as did bear rule in their kingdoms - Ecclesiasticus 44:1&3.

Yesterday's funeral of President George H.W. Bush has led to some online discussion amongst Episcopalians concerning the historical 'quasi-established' status of TEC.  Unease regarding this status - a status clearly on display yesterday - perhaps chiefly derives from an 'anti-Constantinian' theology, the Hauerwas-like denunciation of establishment as compromising the Church's mission and witness.

This theology is based around a rejection of political power, national identity, and military service as incompatible with the vocation of the baptised.  In doing so, however, it privileges one period in the Church's history (the time before the peace of the Church granted by Constantine) and rejects Christian practice over very many centuries.  We might also add that it ignores the logic of the Church of the martyrs, as O'Donovan states:

the church must be prepared to welcome the homage of the kings when it is offered to the Lord of the martyrs.  The growth of the church, its enablement to reconstruct civilisational practices and institutions, its effectiveness in communicating the Gospel: these follow from the courage of the martyrs, and the church honours them when it seizes the opportunities they have made available to it.

Somewhat ironically, such 'anti-Constantinian' theology can become a progressive version of Dreher's Benedict Option - a sectarian withdrawal from the life of the polity and commonwealth.  This leads us to its chief weakness.  In the words of John Hughes:

they are implicated in certain novel departures from Christian tradition in modernity and ultimately depend upon an overly angelic anthropology that renders key traditional Christian practices incoherent.

Christian practice over centuries has sought to shape the life of the commonwealth, has regarded military service as honourable, understood governing as a vocation, and expounded the duties of members of the commonwealth. This understanding is seen in what Ron Dart terms the "magisterial-kingdom aspect of Anglicanism", an understanding enshrined in the Articles of Religion:

[Princes] should rule all estates and degrees committed to their charge by God ... It is lawful for Christian men, at the commandment of the Magistrates, to wear weapons, and serve in the wars ... Christian Religion doth not prohibit, but that a man may swear when the Magistrate requireth.

Here are Christian practices which recognise that as social and cultural beings, for whom life in the polity is natural, the Church should seek to ensure through prayer, blessing, teaching, and moral formation that life in the polity is caught up in Christ.  By contrast, an "overly angelic anthropology" is incapable of offering practices to sanctify these aspects of our common lives, instead counselling an Anabaptist rejection of the commonwealth, incompatible with both the Anglican tradition and consistent Christian practice and experience over centuries.

The Anglican tradition, then, embodies what James K.A. Smith has termed - in contrast to Benedict Options (of Left and Right) - "the Augustinian call".  Smith points to St Augustine's letters to Boniface, a Roman governor and military commander.  While Boniface wonders about the suitability of his role, Augustine urges him to regard it as vocation:

Do not think that it is impossible for any one to please God while engaged in active military service ... Peace should be the object of your desire; war should be waged only as a necessity, and waged only that God may by it deliver men from the necessity and preserve them in peace. For peace is not sought in order to the kindling of war, but war is waged in order that peace may be obtained. Therefore, even in waging war, cherish the spirit of a peacemaker, that, by conquering those whom you attack, you may lead them back to the advantages of peace - Letter 189.

so use the world, as not abusing it, so that with its good things you may do good, not become bad through possessing them. Because these things are in themselves good, and are not given to men except by Him who has power over all things in heaven and earth. Lest these gifts of His should be reckoned bad, they are given also to the good; at the same time, lest they should be reckoned great, or the supreme good, they are given also to the bad. Further, these things are taken away from the good for their trial, and from the bad for their punishment - Letter 220.

do not love these earthly goods, how much soever they may abound to you. So use them as to do many good things by them, but not one evil thing for their sake.

This call to use earthly goods in service of the Good is the 'Augustinian call'.  It affirms - contra the Anabaptist/Hauerwas stance - that the earthly goods of the public realm can be so used and oriented.

Which brings us to yesterday's funeral in Washington National Cathedral.  Euologies, national flag, thanksgiving for public service, recognition of military service.  This is not a 'distraction' from Christian Faith, Resurrection, the sacramental life.  It is the context in which the Faith, Resurrection, and sacramental life can be lived out. Euologies provoke us to gratitude for the virtues. A national flag reminds us that we are called to serve the common good in a commonwealth.  Public service is rightly recognised as a means of serving the common good.  To affirm military service is to say that it is a vocation to be oriented towards peace, justice, and the well-being of the commonwealth.

To strip the funeral of a public servant of such practices is to indulge in that "overly angelic anthropology", handing over the commonwealth to an empty secularism, apart from Christ, to offer no vision of a sanctified commonweal and public service.  It is to deny that earthly goods can be used in service of the Good.

Now, yes, to be a political actor, a President, a Director of the CIA, to engage in warfare - these will inevitably, in a fallen world, result in compromises, collusions, failures that are sinful.  The Church, however, does not 'name' the sins of the deceased at a funeral.  Quite the opposite.  At every graveside, a priest prays:

Forasmuch as it hath pleased Almighty God to take unto himself the soul of our dear brother/sister here departed ...

The Church, in not naming the sins of the deceased, in exercising gracious charity, echoes the mercy of the Triune God:

Look how wide also the east is from the west: so far hath he set our sins from us. 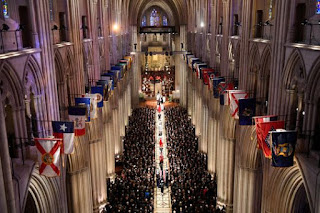 As for a president, so for others.  It is right that a Christian funeral gathers up thanksgiving for the life and vocation of a parent or sibling, teacher or nurse, friend or colleague, police officer or small business owner.  Why? Because these are not 'secular' experiences.  They are vocation and gift, enriching our experience of shared life in the earthly city, anticipating the fullness of life in the City of God.  To exclude such memories and thanksgivings from a Christian funeral is only to encourage the myth of the secular, and to promote a Faith restricted to the 'spiritual' and, indeed, to the 'private' realm.

This understanding has been an enduring part of the Anglican patrimony - seen in the civic aspects of Westminster Abbey or Washington National Cathedral, or in the parish church, with its stained glass window or plaque commemorating a parishioner who served the local community, fell in war, or was a benefactor of the parish.   It is not Erastianism.  It is not a case of 'civic religion'.  It is a gathering up of all things in Christ, from Whom all things come, to Whom all things are called.