I have not turned my back on those who remain in the Church of England and the Anglican Communion.

This is the claim of Michael Nazir-Ali in the final paragraph of his recent First Things article, 'From Anglican to Catholic'. Rejecting the Book of Common Prayer and the Articles of Religion; seeking ordination afresh despite having been ordained deacon, priest, and bishop in the Anglican Communion; embracing a whole raft of doctrines explicitly rejected by Hooker, Andrewes, Laud, Taylor, Keble, and Pusey - quite how this is described as not turning his back on those who remain Anglicans is, to say the least, distinctly odd.  Put more bluntly, it is nonsense.

Rather more revealing is an earlier statement in the article:

I had often boasted that Anglicanism, although reformed, had by divine providence retained both the sacred deposit of faith and the sacred ministry.

'Although reformed'? Perhaps nothing so quite indicates the extent to which Nazir-Ali has rejected classical Anglicanism than this statement.  Anglicanism is Catholic not in spite of the Reformation: it is Catholic because of the Reformation.  Vernacular liturgy, communion in both kinds, married clergy, rejecting the innovation of papal supremacy, restoring patristic eucharistic discourse and practice: the Reformation was an act of ressourcement.  As Jewel stated throughout his Apology:

We do show it plainly that God's holy Gospel, the ancient bishops, & the primitive Church do make on our side ... confirmed by the words of Christ, by the writings of the Apostles, by the testimonies of the Catholic fathers.

This has been an abiding aspect of Anglican self-understanding over centuries.  As the Church of Ireland 1870 Declaration states, in fine Old High fashion:

The Church of Ireland, as a Reformed and Protestant Church, doth hereby reaffirm its constant witness against all those innovations in doctrine and worship, whereby the Primitive Faith hath been from time to time defaced or overlaid, and which at the Reformation this Church did disown and reject.

Nazir-Ali has rejected the reformed ecclesia Anglicana, the Church of Prayer Book and Articles, of Hooker and Andrewes, for the Church of Trent.  Any attempt to contrive continuities or explain similarities cannot obscure this fact.

Something of this is also indicated in his criticism of Anglicanism's wider ecumenical engagements.  While using the ARCIC agreements to justify his actions in abandoning Anglicanism and seeking re-ordination in the Roman tradition, he portrays other ecumenical relationships as supposedly undermining the Anglican-Roman Catholic dialogue:

Other agreements, however, such as those with Scandinavian and Baltic Lutheran churches, and with the French Protestant Church, downplay the importance of apostolic succession as traditionally understood. On the universal primacy, the agreements with the Catholic Church and with the Orthodox seem to say quite different things. What, exactly, is the Anglican view?

Where to begin?  ARCIC is only one ecumenical dialogue.  It holds no privileged position amongst Anglican ecumenical relationships: dialogues with other Churches of the Reformation and with Orthodoxy are at least as important as that with Rome.  What is more, Nazir-Ali himself is a product of Anglicanism's generous and positive relationships with other Protestant traditions.  He was, after all, ordained to all three orders in the Church of Pakistan, a united church embracing Anglicans, Presbyterians, Methodists, and Lutherans.

A classical Anglican commitment over centuries was to extend the historic episcopate to non-episcopal Protestant churches.  The united churches of South India, North India, and Pakistan stand in this tradition.  A small group of Anglo-Papalists left the Church of England after the approval of communion with CSI: it seems as if Nazir-Ali is placing himself in continuity with this rather odd, eccentric group. As for the Porvoo Communion, it is instructive to compare Nazir-Ali's attack on its understanding of episcopacy with the response of the Anglo-Catholic Church Union:

In the context of commitment to ecumenical convergence (shown already in the action of the Norwegian Church in inviting Swedish bishops to take part in consecrations), wise pastoral economy, and a recognition of a wider theological understanding of the historic succession, there are good grounds for Catholic Anglicans supporting the Porvoo statement.

As for the dialogue with Orthodoxy, it has witnessed to the teaching and experience of the patristic churches, as received by the Orthodox, the Oriental Orthodox, Anglicans, Lutheran, and the Reformed: no universal jurisdiction can be claimed by any local church, no matter how venerable, over the Church Catholic.  In the words of the Anglican-Orthodox Cyprus Statement:

It remains unquestionably true that neither the Anglicans nor the Orthodox perceive the Church primarily in terms of a global bureaucratic structure which confers ecclesial life and ministry downwards or outwards from its centre.

The Cyprus Statement also rightly interprets the ecclesia Anglicana's rejection of the papal supremacy as a return to patristic norms:

Ecclesiologically, the Reformation in the Church of England was a reassertion of the national or local church’s right to govern itself within its conciliar relationship with the worldwide Church.

Nazir-Ali's response to this is to claim that debates within the contemporary Church "cry out for an authoritative response. Yet where would one look for such an authority?".  To an authoritative response like Traditionis Custodes? That exercise of universal and immediate jurisdiction by the Bishop of Rome can hardly be claimed to have promoted the unity and communion of the Roman Catholic Church. Or, as one well-known Roman Catholic commentator put in in an article entitled 'Is the Pope a Protestant?':

Francis is driving that ship ["the Barque of Peter"] towards the same rocks that have shipwrecked liberal Protestantism – and not through innocent naivety, but with a mad, self-destructive gleam in his eye.

We might also note in this context that despite Nazir-Ali's claim that supposed Anglican confusion has undermined the ARCIC process, the official Roman Catholic response made clear that even the ARCIC statements on universal primacy (which many Anglicans might judge to have been unwise and imprudent) did not go far enough:

The dogmatic definition of the First Vatican Council declares that the primacy of the Bishop of Rome belongs to the divine structure of the Church; the Bishop of Rome inherits the primacy from Peter who received it "immediately and directly" from Christ (DS 3055; cfr. Lumen gentium 22). From a Catholic viewpoint, it is not possible then to accept the interpretation given in Authority in the Church II concerning the Jus divinum of the First Vatican Council, namely that it "need not to be taken to imply the universal primacy as a permanent institution was directly founded by Jesus during his life on earth" (n. 11). The Catholic Church sees rather in the primacy of the successors of Peter something positively intended by God and deriving from the will and institution of Jesus Christ.

Towards the end of his article, Nazir-Ali turns to that most beloved of Anglican documents, the Book of Common Prayer:

My eucharistic faith is well-expressed in the Book of Common Prayer’s "Prayer of Humble Access".

It also expressed the eucharistic faith of Zwingli:

To attempt to claim the Prayer of Humble Access as somehow justifying the doctrine of Transubstantiation is something that should really only be found in the rantings of sectarian ultra-Protestants or deluded, immature Anglo-Papalists.  The Prayer of Humble Access, by contrast, points to that which the doctrine of Transubstantiation denies - that doctrine is not at all required in order to affirm that Christ gives Himself to us in the Sacrament of Bread and Wine.  As Hooker stated, reviewing Roman, Lutheran, and Reformed eucharistic teaching:

It is on all sides plainly confessed, first that this sacrament is a true and a real participation of Christ, who thereby imparteth himself even his whole entire person as a mystical head unto every soul that receiveth him, and that every such receiver doth thereby incorporate or unit himself unto Christ as a mystical member of the same (LEP V.67.7).

So, no, the Prayer of Humble Access cannot be claimed as somehow pointing to Transubstantiation.  It does quite the opposite.  It is a prayer of the Reformation, declaring that the true participation in Christ in the holy Supper, according to the Scriptures and after the Fathers, does not require a doctrine promulgated by a synod of the Roman Church in 1215.  In the words of Cranmer:

This is the true catholic faith which the Scripture teacheth, and the universal Church of Christ hath ever believed from the beginning, until within these four or five hundred years last past. 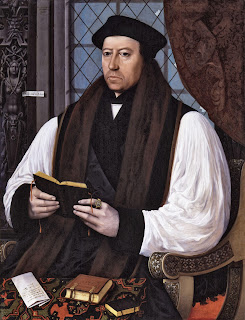 Michael Nazir-Ali has indeed turned his back on that vast majority of Anglicans who remain and will continue to be Anglicans.  To attempt to claim that he now stands in greater continuity with Anglicanism over the centuries is, quite obviously, not to be at all taken seriously.  He is, of course, entirely within his rights to change his mind on matters of faith and theology: to reject Article 28 and embrace Transubstantiation; to reject the rights and liberties of duly ordered national churches for the Papal supremacy; to reject the Reformation and embrace Trent.  Having done so, he should, on the basis of our common baptism and shared hope, rightly expect our prayers and charity.

Our prayers and charity, however, certainly do not prevent us robustly contesting a ludicrous claim that rejecting Prayer Book and Articles in order to embrace Roman Catholic teaching somehow stands in continuity with classical Anglicanism.