Why should we pray Cranmer's collect for Advent II?

Blessed Lord, who hast caused all holy Scriptures to be written for our learning: Grant that we may in such wise hear them, read, mark, learn, and inwardly digest them, that by patience and comfort of thy holy Word, we may embrace and ever hold fast the blessed hope of everlasting life, which thou hast given us in our Saviour Jesus Christ. Amen.

A common feature of much recent Anglican liturgical revision has been to remove Cranmer's collect for the Second Sunday in Advent out of the season.  So, for example, in the Church of England's Common Worship it is the collect for the last Sunday after Trinity and before the 'Sundays before Advent', while in the Church of Ireland's BCP 2004 it is the collect of the 'Fifth Sunday before Advent'*. This is similar to the approach in TEC's BCP 1979, where the collect is given for Proper 28, "the Sunday closest to November 16".

Clearly those undertaking liturgical revision determined that Cranmer's collect was somehow unsuitable to the season of Advent.  Is this reading of the collect correct?  After all, even Sparrow states that "it seems not to relate to the day, yet is it an excellent prayer for all times".

Before directly answering the question, we should pause to consider the wisdom of removing from its place in the Church's year a collect that has deeply resonated.  While Cranmer's collect for Advent III was replaced in 1662, the collects for the remaining Sundays of Advent, including that for Advent II, were a fixed feature of Anglican liturgy from 1549.  This collect, then, was not a concluding thought to the Sundays after Trinity, but the second collect prayed by the Church at the beginning of another round of the liturgical year.  This certainly suggests a more prominent position than that given in contemporary liturgical calendars.

What is more, as the collect for Advent II it prayerfully commended the practice which the Church was again undertaking, of turning to Epistles and Gospels in the traditional lectionary, that for another year we might "hear them, read, mark, learn, and inwardly digest them".  It surely does seem more fitting to pray this at the yearly commencement of this practice, rather than at its conclusion.

We can, however, say more than this.  The collect is particularly suited to the Advent season.

The Epistle appointed for Advent II - beginning at Romans 15.4 - has a focus on the Scriptures of the Old Covenant:

And again, Esaias saith, There shall be a root of Jesse, and he that shall rise to reign over the Gentiles; in him shall the Gentiles trust.

The practice of reading the Scriptures of the Old Covenant embodies St Paul's understanding that in the Church the Gentiles have been "grafted contrary to nature into a good olive tree", into the story of Israel.  This is particularly experienced during Advent, when the prophet Isaiah is read at Mattins and Evensong, when the Church sings "ransom captive Israel, That mourns in lonely exile here".  In the collect, the Church prays that through the reading of the Scriptures, experiencing the travails of this earthly pilgrimage, we too - in communion with exiled Israel - may be renewed in "patience".

Looking for that blessed hope, and the glorious appearing of the great God and our Saviour Jesus Christ.

The deep eschatological yearning of the Scriptures of the New Testament thus also shapes the collect, drawing us into the hope of the earliest Apostolic communities, orienting us towards that "glorious appearing".

Finally, there is the focus of the collect, the Church's practice of attending to the holy Scriptures: to "hear them, read, mark, learn and inwardly digest them".  This practice itself as a foretaste of the Advent of the Lord:

For the word of God is quick, and powerful, and sharper than any twoedged sword, piercing even to the dividing asunder of soul and spirit, and of the joints and marrow, and is a discerner of the thoughts and intents of the heart. 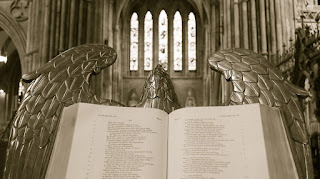 In the words of Enzo Bianchi (Prior of Bose), the encounter with Scripture is "a revelation of the divine presence". Whether in communal reading or in lectio divina, to hear and read the Scriptures is to encounter the Word whose judgement refines and purifies, an anticipation of "the last day, when he shall come again in his glorious Majesty to judge both the quick and the dead".

Cranmer's collect for the Second Sunday in Advent is deeply imbued with the themes and experiences of the season.  Above all, it takes a common practice of the Church - hearing and reading the Scriptures - and draws us to perceive it as an Advent experience.  To remove this collect from Advent is to detract from both the richness of the BCP observance of Advent and our understanding of what is experienced when we attend to the Scriptures.

* It is worth noting that a rubric in the CofI BCP 2004 does allow Cranmer's collect - appointed for the Fifth Sunday before Advent - to be used with Order I (the traditional language rite) on Advent II.