"The days are nameless": the Prayer Book tradition and the Christmastide feasts 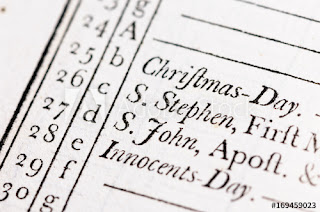 Turn to the collect, epistle and gospel for Christmas Day in any Book of Common Prayer in the classical Prayer Book tradition (1662, Ireland 1926, PECUSA 1928, Canada 1962), and you will see that it is immediately followed by the collects and readings appointed for St Stephen's Day, St John the Evangelist's Day, and Holy Innocents' Day.

This is an ancient pattern.  It is seen, for example, in the Gelasian Sacramentary.  In other words, this ordering within liturgical books dates back to one of the oldest texts used in the worship of the churches of the Latin West.

Now contrast this with most contemporary Anglican liturgical books.  TEC's BCP 1979, Canada's Book of Alternative Services, England's Common Worship, Ireland's BCP 2004: all of these place the collects for St Stephen, St John and the Holy Innocents apart from the Christmastide provision.  The collects for these feast days are placed at the year's end of the collects for saints's days.

What is the significance of this?  To begin with, it physically removes these collects from their liturgical context - the Christmas octave.  There is a wisdom in the Prayer Book tradition, following the ancient sacramentaries, of placing the collects within the Christmastide provision.  This embodies the insight that these feasts are intrinsically related to the Church's celebration of the Lord's Nativity.

The contemporary pattern, by contrast, encourages us to consider these feast days apart from Christmas.  Literally standing apart from Christmastide in liturgical texts, it is not immediately obvious that they 'belong' to this season.  Indeed, the logical conclusion of removing the collects for the three days from the Christmastide provision is indicated in the Canadian Book of Alternative Services, in which alternative dates outside of Christmas are suggested for the three feasts (respectively, 3rd August, 6th May, and 11th January).

The Prayer Book tradition's physical placing of the collects and readings for the three feast days following Christmas Day was an explicit affirmation of the traditional Christmas liturgical observances and the traditional understanding of the shape and pattern of the festive season. It is, then, a means of challenging and enriching the culture's impoverished Christmas celebrations. The poet Kenneth Steven captures this impoverished cultural understanding:

Between Christmas and New Year
The days are nameless; they lie lost and strange - 'Romjula' in Evensong.

The Prayer Books tradition's placing of the collect for the traditional feasts after Christmas Day is a means of ensuring that these days are not "nameless ... lost and strange".  Their placing here unveils their meaning.

For the Church, the placing of the collects for St Stephen, St John the Evangelist, and the Holy Innocents within the Christmastide provision is an explicit call to reflect on the Incarnation from the perspective of the witness of these saints, a witness revealing the intrinsic unity of the mystery of the Incarnation and the Paschal Mystery ("none are thought fitter attendants on Christ's Nativity, than the blessed Martyrs" - Sparrow).  This understanding is intensified with the Prayer Book tradition directing that the collect of Christmas Day is also to be prayed following the feast day collects (a practice notably absent from contemporary Anglican liturgies).  In doing so, the Church is drawn into the unity of the Incarnation and Passion.

In the introduction to her Reading the Liturgy: An exploration of text in Christian worship, Juliette J. Day states of liturgical texts, "their very textuality generates a particular type of meaning-making".  This is the case with the placing of the collects for these feast days in the texts of the classical Prayer Book tradition.  This placing is itself an expression of narrative: as Day puts it, it is "the manner of telling the story". To change the text is to alter the manner of telling the story and this can have an impact on "the level of coherence in its telling".  What was coherent can become less coherent.

In other words, what is at first sight merely a case of tidying-up a liturgical text, actually detracts from the meaning of the celebration of these feast days in the three days following Christmas Day. Undermined and obscured when the collects are placed elsewhere within a liturgical text, the placing of these collects in the texts of the Prayer Book tradition embodies both the Church's rich understanding of the Christmas season and of the meaning of the feast days.