A carol, the lowly Maiden, and a native piety 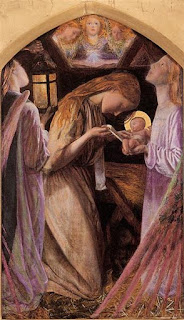 While classical Anglican reflection on the role of the Blessed Virgin Mary has been characterised by an Augustinian reserve and reticence, this should not be interpreted as a cold, aloof rejection of a Marian presence in the devotional life.  Perhaps one of the most significant expressions of a warm Marian devotion in the classical Anglican form has been on the lips of very many during the past few weeks:

And through all His wondrous childhood
He would honor and obey,
Love and watch the lowly maiden,
In whose gentle arms He lay.

'Once in Royal David's City' emerged from within the Old High Church tradition in the Church of Ireland.  While both the hymn's author, Cecil Frances Alexander, and her husband, William Alexander - later Bishop of Derry and Raphoe and Archbishop of Armagh - had links with Tractarianism, their son's Foreword to the father's memoirs points to a household shaped by traditional High Church commitments:

he continued to be in sympathy with the original aims of the Tractarians; and throughout his life he was distinctly a High-Churchman in the strong and sane sense, as distinguished from what has been called, or miscalled, a Ritualist.

Similarly, the Foreword reprints a letter to the hymn's author from the Old High Church Bishop of Exeter, Philpotts, on the subject of private confession, then a matter of some controversy between the High Church tradition and advanced Tractarians:

It is very true that our Church does not forbid the practice of habitual confession. But she must, I think, be considered as virtually discouraging it, inasmuch as she does not even contemplate the practice except in two cases.

The son notes that his mother "preserved" the letter.  He goes on to note that through her links with leading early Tractarians, "she saw by demonstration what the original leaders of the Movement had aimed at, before its unfortunate development in younger hands".

'Once in Royal David's City', then, gives expression to the piety of the Old High Church tradition - a tradition which at first welcomed the Oxford Movement, but was subsequently deeply alarmed by how the Movement developed.  Amongst those developments was a pattern of Marian devotion shaped by Tridentine rather than Anglican piety (and this despite the opposition of, for example, Pusey).

What 'Once in Royal David's City' demonstrates, however, is that this turn to Tridentine piety was not necessary.  A Marian devotional warmth within the norms of classical Anglicanism was possible.  What is more, it was a devotional warmth which would resonate across English-speaking cultures, with 'Once in Royal David's City' now synonmous with Christmas carol services.

It also gives devotional expression to the references to the Blessed Virgin in the Christmas propers of the Book of Common Prayer - the "pure Virgin" of the collect, the "of the substance of the Virgin Mary" of the preface.  The carol's Marian dimension is rooted in this native liturgical piety, this affirmation that to confess the Incarnation is to reverence the Blessed Virgin, "the lowly maiden", a pattern embodied in the Te Deum, Magnificat, and Creed at Mattins and Evensong daily throughout the year.

The words of the carol draw us to know within the heart that the Incarnation is no abstraction. We sing of the Incarnate Word that He would "love and watch the lowly Maiden", cradled by her "gentle arms".  Here is warmth in which 'heart speaks unto heart', in which the love shared by Child and Mother enkindles love within us, drawing us to behold the Incarnation not as concept but as the experience of saving grace and love, touching and transfiguring us in the ground of the heart.

Perhaps it is that Augustinian reserve and reticence, mentioned at the outset, which contributes to this devotional warmth.  This reserve and reticence ensures that classical Anglican Marian piety has a distinct focus on the Blessed Virgin's role in the Incarnation, what George Herbert described as "the holy mine, whence came the gold".  Rather than an elaborate system of Mariology, it is this very reserve which leads us to behold, with an 'uncluttered' warm devotion, "the lowly maiden" who carries and feeds, holds and nurtures God Incarnate.