New Year's Day is not 'secular' 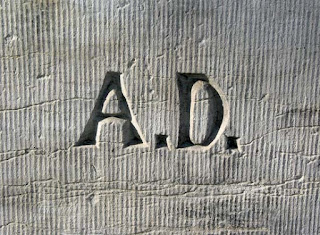 Not the bleak speak of mobile messages,
The soft chime of synthesised reminders,
Not texts, not pagers, data packages,
Not satnav or locators ever find us
As surely, soundly, deeply as these bells
That sound and find and call us all at once - from Malcolm Guite, 'New Year's Day: Church Bells'.

New Year's Day, we are often told in ecclesiastical circles, is 'secular'.  The Church's 'new year', we might be told, begins in Advent (actually, it doesn't - Advent marks the beginning of a new liturgical cycle).  The world may think it is New Year's Day, but the Church knows better: it's the feast of the Circumcision of Christ (traditional in the West) or Mary, Mother of God (the recent innovation in the Roman rite).  And, of course, some might remind us that 1st January as New Year is supposedly a recent observance, with Lady Day being preferred as more traditional.  So let secular culture get on with celebrating their New Year.  We, the Church, stand for something different.

The deep irony with such stances is that they collude with secularism, dismissing as 'secular' an experience which has meaning and significance for very many (not all) cultures across the globe.  To dismiss New Year as secular is to declare that "the bleak speak" shapes and determines this passage of time, rather than the deeper sound of church bells ringing out prayer, joy, and hope.

To dismiss the passing of the year as 'secular' is to fundamentally misunderstand the Church's relationship to time and place.

The Church on earth dwells within the passage of time, within the passing of years and seasons.  This is what it is to be creatures, to dwell in time and space.

He appointed the moon for certain seasons.

It is similar with the passage of the years, including marking 1st January as the beginning of the new year.  As Clerk of Oxford has stated, this date is not a creation of the Enlightenment but is deeply rooted in the celebration of Christmas:

This idea of renewal and the cycle of the year is linked, of course, with the fact that Christmas and the New Year fall so close together. In the north the cusp of December and January is a time of seasonal and cosmic rebirth; with the solstice we passed the darkest midpoint of winter, and now spring is in sight. Although historically there have been various ways of reckoning when the New Year began ... the idea that Christmas or 1 January was the beginning of the new year was always around somewhere throughout the medieval period.

In the BCP 1662, this sense of New Year being embraced by Christmastide - rather than rejected as 'secular' - is seen in the rubric following the collect for Saint Stephen's Day:

Then shall follow the Collect of the Nativity, which shall be said continually unto New-year's Eve.

This was developed within the Prayer Book tradition, with the lections at Evensong on 31st December in the CofE's Revised Table of Lessons (added to BCP 1662 in 1922), CofI 1926, and PECUSA 1928 addressing the theme of time, appropriate for New Year's Eve.

In the Prayer Book tradition, of course, 1st January is the feast of the Circumcision of Christ.  Rather than somehow displacing New Year's Day, or being a reason to reject it as 'secular', this feast gives meaning to New Year's Day, as the closing words of the appointed Gospel indicate:

And when eight days were accomplished for the circumcising of the child, his name was called Jesus, which was so named of the angel before he was conceived in the womb.

Anno Domini. How we name the passage of the years is determined by this feast.  The year begins with the Church celebrating, rejoicing, and affirming that the new year is Anno Domini. (Which, by the way, is good reason for Anglicans to maintain this feast day rather than imitating the Roman tradition's recent adoption of the East's Marian feast on this date, displacing the West's long-established feast of our Lord.)

Rooted in and given meaning by the Church's celebration of the mystery of the Incarnation, New Year's Eve and Day are intrinsically related to this mystery.  Even determined secular attempts to mark the occasion cannot prevent the numbering of the year witnessing to the Incarnation of our Lord.  In enfolding New Year's Day in the yearly celebration of the Lord's Nativity, the Church makes this explicit, that He is "Alpha and Omega, the beginning and the ending".

Filled with the new light of the Incarnate Word, New Year's Day is not, cannot be secular.