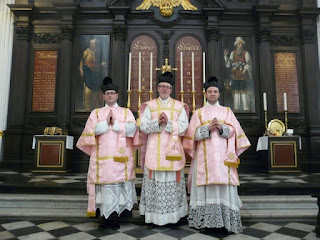 I admit that the title is a tad provocative.  This post is not a condemnation of Gaudete Sunday.  Rather, it seeks to reflect on the rationale for its absence from trad Anglican liturgy, and the coherence of that rationale.

That Gaudete Sunday was intentionally removed by Cranmer is clear.  While he retained the traditional epistles of the Sundays in Advent, he exchanged the epistle readings for Advent III and IV.  Thus, Philippians 4:4-7 - "Rejoice in the Lord always: and again I say, Rejoice" - became the epistle of Advent IV.  Alongside this, while 1549 did provide an introit, it was not the traditional Gaudete introit.  This had been a combination of words from the epistle with Psalm 84.  In its place Cranmer simply had Psalm 4.

Cranmer's removal of Gaudete Sunday from Advent is only emphasised when we considered that his provision for Laetare Sunday - Lent IV - retained the traditional collect, epistle and gospel.

While Cranmer did keep the traditional collect of Gaudete Sunday, the collect itself does not reflect the Gaudete theme.  And then, of course, it was replaced by Cosin's collect in 1662:

O Lord Jesu Christ, who at thy first coming didst send thy messenger to prepare thy way before thee: Grant that the ministers and stewards of thy mysteries may likewise so prepare and make ready thy way, by turning the hearts of the disobedient to the wisdom of the just, that at thy second coming to judge the world we may be found an acceptable people in thy sight...

This collect completes and fulfils Cranmer's intentions for the Third Sunday in Advent, no longer Gaudete Sunday.  As with the epistle reading (previously that of Advent IV), the collect brings together the Advent and Ember week themes.  The collect takes from the epistle the phrase "the ministers of Christ, and stewards of the mysteries of God", while also in "at thy second coming to judge the world" echoing the epistle's "until the Lord come, who both will bring to light the hidden things of darkness".

Cranmer's emphasis for The Third Sunday in Advent, completed by 1662 collect, is on that combination of the Advent theme of judgement and the incoming Ember Week.   Gaudete Sunday has no place in this provision, probably because it distracts from this dual emphasis.  We might speculate about other reasons for removing Gaudete Sunday.  Advent is a short season, and - despite its origins in St Martin's Lent - has not traditionally had the same penitential disciplines as Advent.  There is not, then, the same need for encouragement in penitence and penance as provided by Lent's Laetare Sunday.

The shortness of the season also means that care must be taken that the Advent emphasis - "in the last day, when he shall come again in his glorious Majesty to judge both the quick and the dead" - is not overshadowed or displaced.  Thus the solemnity of the Church's Advent prayer, it might be suggested, is not aided by Gaudete Sunday.

Which brings us to Cranmer moving the traditional Gaudete Sunday epistle to the Fourth Sunday in Advent.  As this short season draws to a close, as the festive season approaches, Cranmer's placing of this epistle in Advent IV has great resonance.  The words of the epistle, "Rejoice in the Lord alway ... The Lord is at hand", carry a double meaning in the closing days of Advent.  They express the Church's Advent hope, will also echoing our festive preparations.  This is also seen in the Baptist's words in the Gospel reading: "he it is, who coming after me ...": in these last days of the season, there is a dual sense to that "coming".

In other words, as an unfolding of sacred and liturgical time, they are much more effective on Advent IV than III, holding together both themes even as we try to do so in Advent's final days (mindful that the BCP requires the Advent collect to be prayed "until Christmas Eve"). 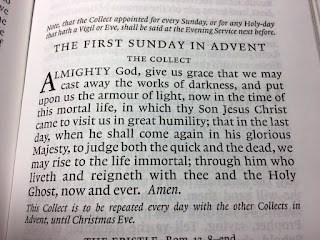 Within the traditional Roman rite, Gaudete Sunday has coherence and purpose.  This is not so in traditional Anglican liturgy.  Cranmer's revision of the Sunday lectionary, and his provision of a powerful seasonal collect, gave a much clearer focus on the Creed's affirmation that "he shall come to judge the quick and the dead".  With the Third Sunday in Advent also beginning an Ember Week, this - rather than Gaudete - became the dual theme of the Sunday's readings and, in 1662, the collect.  Moving the epistle and gospel of Gaudete Sunday to Advent IV, Cranmer enriched the experience of sacred time, holding together the Lord's first and second comings.