"Most virtuous Lady": on honouring the Conception of the Blessed Virgin Mary 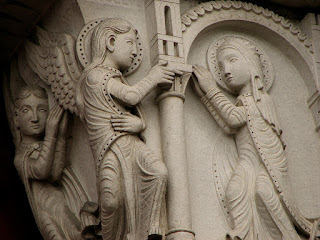 In the 1662 Calendar, the Conception of the Blessed Virgin Mary is a Black Letter day, with no liturgical provision.  In the Proposed Book of 1928, it is a Lesser Feast, with a collect but no readings.  In the Scottish Prayer Book 1929, it is placed under "For Various Occasions", apart from major holy days and saints' days, and shares a collect and readings with the Nativity.  In the Canadian BCP 1962, it is a "lesser commemoration" in the Calendar, sharing the collect and readings "For the Blessed Virgin Mary" with other lesser Marian commemorations.

There is pronounced Anglican reticence regarding the Conception of the Blessed Virgin Mary, a reticence which reflects a patristic reserve before the sanctity of the Mother of the Redeemer.  In the words of St Augustine:

Now with the exception of the holy Virgin Mary in regard to whom, out of respect for the Lord, I do not propose to have a single question raised on the subject of sin ... to repeat then: with the exception of this Virgin, if we could bring together into one place all those holy men and women, while they lived here, and ask them whether they were without sin, what are we to suppose that they would have replied? - On Nature and Grace, 44:267.

"Out of respect for the Lord", Augustine would not question the Blessed Virgin Mary about sin.  Here is reverence and honour before a noble Lady - appropriate reticence and reserve, not dogma.  Hooker points to Augustine on this matter: "we say with St. Augustine, for the honour’s sake which we owe to our Lord and Saviour Christ, we are not willing, in this cause, to move any question of his mother", to whom he refers as   "the blessed Virgin herself".  However, he goes on to state that "forasmuch as the schools of Rome have made it a question", it must be addressed, which he does through quoting a homily of Eusebius of Caesarea:

The mother of the Redeemer herself, otherwise than by redemption, is not loosed from the band of that ancient sin.

Hooker's issue is that "the schools of Rome" have intruded and speculated where Augustinian reticence should have prevailed.  Ironically, indeed, the later dogmatic definition of the Immaculate Conception - precisely because it entirely rejected the Augustinian reticence recommended by Hooker - resulted in the very issue being raised in debates between Christians which Augustine urged should not lead to "a single question".

A "Lesser Feast", rather than a great festival in the midst of Advent celebrating a 19th century dogmatic defintion, is a much more appropriate way of commemorating the Conception of the Blessed Virgin Mary.  A Lesser Feast - also, indeed, a Black Letter Day without liturgical provision - gives expression to Augustinian reticence and honour.  The Anglican tradition, before the Conception of the Blessed Virgin Mary, does not probe and speculate.  We do not provoke dishonour and a lack of reverence by dogmatic exaggeration and doctrinal over-reach.  We do not - to use phrases the later Newman would not thank us for borrowing - exercise "curiosities of thought" and "undisciplined imaginations" regarding her Conception.  We gently commemorate her Conception because, in the words of Pusey, it "related at first to 'the sanctification of the Blessed Virgin,' the contradictory of her Immaculate Conception".

The Calendar commemorating her Conception recognises the grace and vocation which brings us to consistently honour her with the title Blessed Virgin Mary; in Te Deum, Magnificat and Creed to daily reverence her role in the mystery of salvation; to celebrate on Candlemas and Lady Day her participation in the saving events of the Lord's Incarnation and Passion.

Let me conclude with words from a perhaps surprising source, the Book of Homilies.  The Reformed tones of the Homilies are self-evident.  Yet they contain a very traditional and quite beautiful reference to the Blessed Virgin as "this most noble and most virtuous Lady".  Such nobility and virtue is honoured not by unseemly speculation and overstatement but through reticence and reserve.