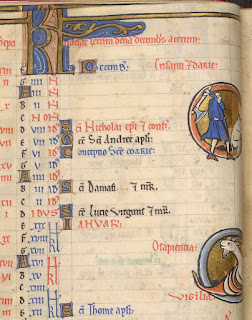 This coming Sunday, 16th December, is a Black Letter day in the BCP 1662 Calendar: O Sapientia, the first of the Advent antiphons.  Its inclusion in the Calendar, together with many other Black Letter days, dates to 1561.  What is the significance of this day being commemorated in the Prayer Book Calendar?

In face of Puritan critiques of the Black Letter days, the bishops of the Church of England at the Restoration defended their inclusion in the Calendar:

[they] are left in the Calendar, not that they should be so [as red letter days] kept as holy days, but they are useful for the preservation of their memories and for other reasons, as for leases, law days, etc.

Let us begin with the second of these reasons.  The Black Letter days mark time.  The inclusion of O Sapientia in the Calendar reminds us that we are now in the depths of Advent.  Advent is quickly passing.  The festive season draws nigh.  O Sapientia, then, is a call to the Church to sustain the spirit of Advent, embodied in the collect prayed each day in this season. With only nine days until Christmas Day, we are called by O Sapientia to recognise afresh the gift of Advent.

When we arrive at O Sapientia in the Calendar, we are told - in the words of John Mason Neale, in his sermons on the Black Letter days - that "The Lord is now very nigh at hand".  At a stage when festive preparations can intensify, O Sapientia reminds us that we are yet in the days of Advent: indeed, that we are entering 'deep Advent'.

Of course, the BCP makes no provision for the liturgical use of the Advent antiphons.  They were one of those features of the daily office on Cranmer's mind when he wrote 'Concerning the Service of the Church':

But these many years passed, this godly and decent order of the ancient Fathers hath been so altered, broken, and neglected ... with multitude of Responds, Verses ...

The noble simplicity of BCP Evensong does not easily or neatly embrace the liturgical use of the Advent antiphons.  As the bishops said, Black Letter days are not in the Calendar "that they should be so kept as holy days".  That said, the inclusion of O Sapientia certainly suggests that this and the related prayers are worthy devotional material.

Here, then, is a basis for their use in that great Anglican Advent hymn, O come, O come, Emmanuel.  Similarly, with the widespread use of these antiphons in the Advent Processions.  The 'preservation of their memory' by the Black Letter day has allowed for their devotional use in a much more significant manner than their original liturgical use.  It is another expression of a High Church populism, ensuring that a rich liturgical source is used in such a way as to grasp and shape the cultural imagination.

One other point might be considered regarding the BCP Calendar and O Sapientia.  The use of the Sarum date, rather than the 17th used elsewhere in the Latin West, draws us to reflect on place and culture - on how Advent was observed and the festive season prepared for in a particular landscape and cultural experience.  It is a reminder that the reformed ecclesia Anglicana and the Book of Common Prayer stand in continuity with this observance of Advent and these festive preparations; that the Anglican patrimony values this landscape and cultural experience as providing a means of being oriented to both the Lord's Advent and His Incarnation.

There is, then, great richness in the Black Letter day of O Sapientia, marking our entry into deep Advent, bringing us to avail of the devotions traditionally associated with this season, reminding us of how Advent - rather than merely a name for four Sundays of the year - is a season to be experienced.

(The picture is of a 13th century English liturgical calendar: note that O Sapientia is marked for the 16th, not 17th.)