The common cup may now be shared.

So says the Church of England's most recent Covid-19 guidance, issued on 25th January, repeating the guidance given in December. It is, therefore, a rather odd time to renew the campaign to allow the administration of the Eucharist by means of individual cups: after all, the Covid-19 restrictions are being eased across society, the bishops have judged it appropriate to restore the Chalice to the faithful, and there is now no pressing need to consider alternatives.

Unless, of course, this campaign has never really been about public health concerns but, rather, about altering Anglican eucharistic practice and theology.  The Book of Common Prayer 1662 makes clear, explicit provision for what is to happen with "consecrated Elements" remaining after the faithful receive the Sacrament:

When all have communicated, the Minister shall return to the Lord's Table, and reverently place upon it what remaineth of the consecrated Elements, covering the same with a fair linen cloth.

...if any remain of that which was consecrated, it shall not be carried out of the Church, but the Priest, and such other of the Communicants as he shall then call unto him, shall, immediately after the Blessing, reverently eat and drink the same.

Individual cups undermine this careful, deliberate, and theologically significant provision.  Reverent consumption of the remaining consecrated Wine becomes, if not impossible, very difficult, and certainly difficult to do with reverence.  The use of individual cups thus promotes and encourages a radically different theology of consecration to that embodied in the Book of Common Prayer, suggesting that the consecrated Wine can be simply dispensed with after the administration, rather than reverently consumed.

In the Church of Ireland, our House of Bishops have permitted - on a strictly temporary basis - the use of individual cups during the Covid-19 restrictions.  In parishes where this permission has been used, it is very widely the case that the 1662's careful and theologically significant provisions (repeated in the Church of Ireland's BCP 2004) are entirely disregarded. Consecrated Wine is routinely disposed of with the individual cups: there is no reverent consumption, there are no ablutions (required by BCP 2004).

The experience of many places in the Church of Ireland certainly suggests that use of individual cups does indeed promote and encourage a radically different theology of consecration to that embodied in the Book of Common Prayer.

The suggestion that 1662's mention of a flagon somehow points in the direction of the permissibility of individual cups is, of course, a nonsense.  Consecrated Wine from a flagon can be reverently poured into Chalices: it is much less reverent (and much more likely to spill) when 100 individual cups are involved. Nor does the permissibility of consecrating in a flagon impede reverent consumption of the remaining consecrated Elements.

As for the view that individual cups are more appropriate than intinction, the rejection of intinction on the basis that "Jesus tells us to drink, not dip" leads to the rather obvious response that the Lord did not tell us to "knock back this nice little shot glass".  Hooker's strictures about "some show or dumb resemblance of a spiritual feast" (LEP V.68.3) come to mind.

What is more, intinction - while certainly less appropriate than partaking directly from the Chalice - ensures reverent reception of the Sacrament and maintains the Prayer Book's theology of consecration by allowing for reverent consumption after the administration.

Also overlooked by the attempts to promote the use of individuals cups is the fact that historic Reformed practice was not to use individual cups, as seen in the famous paintings of the Scottish and Hungarian Sacraments. When the suggestion of individual cups emerged in the late 19th century, it was inevitably caught up with wider debates.   The innocuous description of a "very lively Anglican debate about 'chalice hygiene' over 100 years ago, especially between the 1890s and the 1920s" rather conveniently ignores the deeply unpleasant undertones of much late 19th and early 20th century debates over what was euphemistically termed 'public hygiene'.

What, then, should be done regarding reception in both kinds in the current circumstances?

Firstly - as in England - the Chalice should be immediately restored to the faithful. It is highly debatable indeed if there was a public health need to withdraw the Chalice in the first place (as indicated in previous public health scares).  Even if there was a need to do this in the early days of Covid-19, maintaining such a withdrawal for two years has been scandalous.

Thirdly, as a temporary pastoral provision, intinction can be provided for those of the faithful who deem it prudent not receive the Chalice directly at this time, as a means of ensuring Communion in both kinds and maintaining the Prayer Book's theology of eucharistic consecration.

Fourthly, the use of the doctrine of concomitance to justify the withdrawal of the Chalice should cease.  In the words of Browne's commentary on the Articles:

it is surely very hazardous to conclude from certain inductions of reason, that one-half of His ordinance may be withheld from the great body of His Church ...We do not indeed wish to deny, that those who, in faith and ignorance, receive a mutilated Sacrament, may receive the full blessing. We trust  that such is the case, because we believe our gracious Lord will give the food of everlasting life, His own blessed Body and Blood, even through imperfect means.

Or, as the Patriarchs of the East stated in their 1848 encyclical responding to Pius X, the doctrine of concomitance makes "the communion of the Cup void of sacred efficacy", an understanding also suggested in the Prayer of Humble Access.

Fifthly, the use of individual cups should be prohibited as incompatible with the Book of Common Prayer's theology of eucharistic consecration.

This is a rather odd defence of individual cups - 'let's lose the symbolism entirely'.  Above all, however, surely the correct response to the issue of symbolism is to examine the use of individual wafers in light of the practice of the Eastern Churches and their use of one Loaf for the Sacrament.  This also seems to be suggested in the Elizabethan Injunctions, when they propose one sacramental Bread as was previously used in private Masses, only "somewhat bigger in compass and thickness". 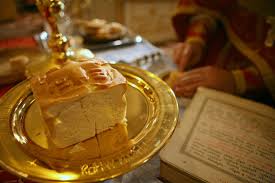 A meaningful conversation and debate over this would be welcome; it would show a seriousness about the Sacrament, what the relevant provision in the Injunctions described as the need for "more reverence to be given to these holy mysteries, being the sacraments of the Body and Blood of our Saviour Jesus Christ"; it would conform to the Prayer Book's theology of eucharistic consecration; and it would demonstrate a commitment to historic, unifying Anglican practice.

The fact, however, that this is not being proposed but that the use of individual cups is being advocated - just as the public health crisis ends - is itself revealing.  Campaigning now for the use of individual cups seems not to be about Covid-19.  Instead it points to a desire to reject the Prayer Book's embodiment of historic Anglican eucharistic practice and theology.