Giving thanks for Elizabeth I 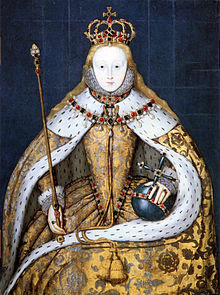 460 years ago today, 15th January 1559, Elizabeth was crowned Queen of England and Ireland.

To mark the occasion, here are five reasons for contemporary Anglicans to be grateful for her reign.

1. Through the Act of Uniformity, on St John the Baptist's Day 1559 Elizabeth restored the Book of Common Prayer.

And further be it enacted by the queen's highness, with the assent of the Lords and Commons in this present Parliament assembled, and by authority of the same, that all and singular ministers in any cathedral or parish church ... shall from and after the feast of the Nativity of St. John Baptist next coming be bounden to say and use the Matins, Evensong, celebration of the Lord's Supper and administration of each of the sacraments, and all their common and open prayer, in such order and form as is mentioned in the said book.

In restoring the Book of Common Prayer, Elizabeth ensured that the gift of Cranmer's liturgy would define the ecclesia Anglicana.  Eamon Duffy notes how one traditionalist, conforming parson would come to affirm the BCP as "the decent Rit[e]s of the Church of Christ".  Within a generation, the BCP would profoundly shape a populist religious culture, prepared to reject and resist Puritan attempts to disorder the Common Prayer of the ecclesia Anglicana.  In the words of Judith Maltby:

the records of the church courts reveal laity who desired not only that their worship conform to the Book of Common Prayer but also that they themselves participate actively in it.  A generation past the Settlement of 1559, attachment had been formed to the Prayer Book's vernacular and antiphonal dialogue between priest and people, which 'the godly' so derisively compared to a tennis match.

That the BCP would go on to shape and enrich the prayer and the lives of Anglicans over centuries is due very much to Elizabeth restoring it to the Churches of England and Ireland.

2. Elizabeth restored the Royal Supremacy, freeing the Church of England and the Church of Ireland from the papal supremacy, reinstated during Mary's reign.

I, A. B., do utterly testify and declare in my conscience that the queen's highness is the only supreme governor of this realm and of all other her highness's dominions and countries, as well in all spiritual or ecclesiastical things or causes as temporal, and that no foreign prince, person, prelate, state, or potentate hath or ought to have any jurisdiction, power, superiority, pre-eminence, or authority, ecclesiastical or spiritual, within this realm - from the 1559 Act of Supremacy.

Contrary to contemporary Anglican embarrassment concerning the Royal Supremacy, it remains a cornerstone of the Anglican experience. It was the Royal Supremacy which embodied the rights and liberties of the "particular or national Church", which denied "foreign jurisdiction", and which ensured - both in the person of the monarch and in the role of Parliament - the participation of the laity in the governance of the Church, alongside clergy and bishops in Convocation

3. During Elizabeth's reign, key figures amongst those who would become 'avant garde conformists' - Peter Lake's term - were ordained in the Church of the Elizabethan Settlement: Richard Hooker in 1579, Lancelot Andrewes in 1580, John Buckeridge in 1588, John Overall in 1591, William Laud in 1601.  With a new confidence in the status of the reformed ecclesia Anglicana, deeply aware of its patristic credentials, committed to the rhythms of Common Prayer and Sacraments in the life of the parish, the avant garde conformists would ensure that the Elizabethan Settlement - against Puritan attacks - would be experienced in parish life.

... immediately before the time of communion of the Sacrament, the priests with other of the quire shall kneel in the midst of the church, and sing or say plainly and distinctly the Litany ... whensoever the name of Jesus shall be in any lesson, sermon, or otherwise in the church pronounced, that due reverence be made of all persons young and old ... that the holy table in every church be decently made, and set in the place where the altar stood, and there commonly covered, as thereto belongs - from Elizabeth's Injunctions of 1559.

As for ceremonies, all that I enjoined were according to law ... As for those which are called by some men, they are no innovations, but restorations of the ancient approved ceremonies in and from the beginning of the Reformation, and settled either by law or custom; till the faction of such as now openly and avowedly separate from the Church of England did oppose them, and cry them down - William Laud.

The avant garde conformists were both the product of the Elizabethan Settlement and those who would cherish, promote, and defend it in its fullness, setting the context for 1662 Anglicanism. Robert S. Bosher states of the Elizabethan Settlement, "the Reformation had been given a peculiarly English expression". It was this which was secured by what Bosher terms "the Laudian triumph" at the Restoration:

If a century before Anglicans had solemnly affirmed that "the Church of Rome hath erred", the Laudian triumph resulted in a judgment of equal moment - that the Ecclesia Anglicana was of another spirit than Geneva.

4. Elizabeth ensured the survival of what would become an important characteristic of Anglican native piety - the choral tradition.  In addition to this being a feature of worship in her court, it was also addressed in the Injunctions issued at the outset of her reign, "for the comforting of those that delight in music":

because in divers collegiate and also some parish churches heretofore there have been livings appointed for the maintenance of men and children to use singing in the church, by means whereof the laudable science of music has been had in estimation, and preserved in knowledge; the queen's majesty ... wills and commands, that first no alterations be made of such assignments of living, as heretofore has been appointed to the use of singing or music in the church, but that the same so remain.

In other words, we owe gratitude to Elizabeth for the fact that, 460 years after her coronation, Choral Evensong continues to nourish, inspire and delight.  As Hooker stated, in defence of the singing of the Offices:

They must have hearts very dry and tough, from whom the melody of psalms does not sometime draw that wherein a mind religiously affected delights.

5.  Which brings us again to Hooker.  Beginning in 1594, Richard Hooker's Of the Lawes of Ecclesiasticall Politie were published.  This defining text for the ethos of the ecclesia Anglicana, foundational for how what would become known as Anglicanism, was a product of Elizabeth's reign. As Diarmaid MacCulloch expresses it:

... Hooker, that delicate subverter of the Reformed tradition, the theologian of the Elizabethan Church who most resonates with the idiosyncrasies and strong opinions of Queen Elizabeth I. 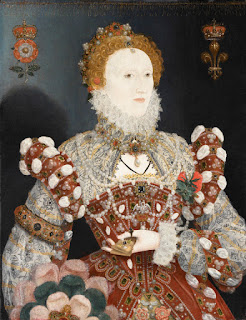 The Lawes would not have emerged if Pius V had achieved the purposes he declared in Regnans in Excelsis.  Indeed, Hooker's relationship with Elizabeth is more than only a matter of chronology.  The Lawes was a defence of Elizabeth's Church.  In the words of Torrance Kirby:

he sought to disclose the systematic foundations, both natural and supernatural, of the institutions of the Elizabethan Settlement.

No Elizabeth, no Elizabethan Settlement, no Of the Lawes of Ecclesiasticall Politie.