The embarrassment of Anglican social teaching? 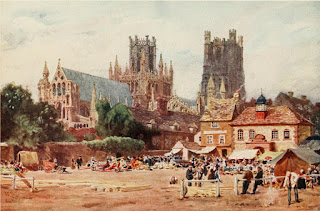 Related to yesterday's post, do read the latest offering from The Hipster Conservative on 'The Idea of an Anglican Society', addressing the place of the Market in human society.  Attention is drawn to the Book of Homilies urging the "keeping and hallowing [of] Sunday".  The Homily points to the commercial reasons given for not doing so:

The post sees here a forerunner of the 'blue laws' in the United States:

While largely a remnant of a by-gone era, there do remain some blue laws in the United States. The objection to them is a common one in our liberal world: Our liberty is being infringed and restrictions of said liberty are unjust.

to consider the old ancient bounds and limits belonging to our township, and to our other neighbours bordering about us, to the intent that we should be content with our own, and not contentiously strive for other's, to the breach of charity, by any incroaching one upon another, or claiming one of the other: further that in ancient right and custom our forefathers have peaceably laid out unto us for our great commodity and comfort ... As it is the part of every good townsman, to preserve as much as lieth in him the liberties, franchises, bounds, and limits of his town and country: but yet to strive for our very rights and duties with the breach of love and charity, which is the only livery of a Christian man, or with the hurt of godly peace and quiet ... that is utterly forbidden ... Let us therefore take such heed in maintaining of our bounds and possessions, that we commit not wrongby encroaching upon other.

This is, as the post notes, a challenge to those who assert a clear relationship between Protestantism and Capitalism.  Take, for example, Brad Gregory's The Unintended Reformation: How a Religious Revolution Secularized Society.  One reviewer said of Gregory's work that it was "a book on greed and the historical roots of capitalism".  However, as The Hipster Conservative notes:

Thanks to Max Weber and some Roman Catholic commentary, Protestantism often gets associated with unbridled free market capitalism. Looking back to the Anglican formularies, it seems that this common view is mistaken.

In this context we should also consider Philip Anderson's recent article on the Elizabethan Settlement, the Prayer Book and poor relief:

In these terms poor relief became part of the response to God required of the godly in a properly ordered commonwealth.

The Anglican formularies do indeed set forth a much more traditional, communitarian understanding of society, market, and polity:

Which leaves us to the central question of this series: does Anglicanism specifically have anything to say on this subject? Looking through the Book of Homilies it seems that there is. Freedom is not the central or even primary good of human society. A truly humane vision of the common good is one where the market is kept in its rightful place and where the temporal and spiritual well being of humanity is kept in balance. The primary purpose of the market is not itself, or some abstract freedom but rather human flourishing, which must take into account our created and spiritual nature.

This is but a taste of the rich social teaching contained within the Homilies, as they set forth a right and due ordering of relationships with spouse, neighbours, the poor, and the realm, together with the understanding of communal relationships and polity in the Book of Common Prayer and Articles 37-39.

It is a social teaching with the potential for significant contemporary resonance.  Evidence of popular dissatisfaction with and distrust of the liberal economic order is not exactly difficult to come by.  In the United Kingdom, popular support for Corbynomics - the policies of the Left-wing leader of Labour - is far greater than support for Labour.  In the United States, with the Democrats increasingly less the party of the Clinton and more the party of Sanders and Alexandria Ocasio-Cortez, conservative commentator Michael Brendan Dougherty has urged the Right to abandon its "absentminded idolatry of 'the market'":

good conservative government involves reconciling the diverse interests of your society toward the common good.

Similarly, Matthew Walther has stated has highlighted a growing number of US conservative critics of what he terms the "cult" of the Market:

It is difficult for me to understand exactly why conservatives have come around to their present uncritical attitude toward unbridled capitalism.

One would think, then, that Anglicans and Episcopalians might be recognising this opportunity to share Anglican social teaching and its understanding of what is required for authentic human flourishing in community and polity.

Why not?  There are, perhaps, two reasons.  The first is the fascination with the social teaching from another Christian communion and tradition.  Thus, Justin Welby speaking in April 2018:

One of my great inspirations comes from Catholic social teaching.

It is as if Anglican social teaching and its expression in our classical formularies does not exist.  This may be due to a wider failure to engage with the formularies.  The key factor, however, may be - as Tracey Rowland has demonstrated with devastating effect - that Vatican II and post-conciliar Catholic social teaching has increasingly been an expression of the liberal, right-based culture of modernity, "a hostile medium for the flourishing of Christian practices and beliefs".  Put simply, post-conciliar Catholic social teaching can easily descend into a rather bland statement of 'progressive' verities - the sort of verities that can be attractive to some Anglicans.

The second reason for the failure to proclaim classical Anglican social teaching may be due to it being, well, consistent and coherent.  Philip Blond, the author of Red Tory, has critiqued both the Labour and Conservative responses to what he terms "the age of insecurity":

Both parties are in this way being traditional: the left has always been critical of economic “neoliberalism”; the right has reverted to a socially conservative defence of established communities. But neither party has a full response. Labour has nothing to say on cultural security, preferring instead to focus on extreme identity politics. Likewise, Conservatism has not yet developed an account of how to secure economic justice through the market – preferring instead to speak to the country as if everyone was an entrepreneur and business owner and nobody was a waged worker.

Classical Anglican social teaching, by contrast, does both.  It calls for the commonweal to shape the marketplace.  And it sets out and supports the relationships and allegiances which enable neighbourhood and realm to flourish.  For many Anglican spokespersons and bishops, the former is fine.  The latter, however, sounds suspiciously conservative.  Never mind the fact that Blue Labour's self-description could also function as an apt summary of classical Anglican social teaching:

It combines respect for family, faith and work with a commitment to the common good: sustainable politics that helps people lead meaningful lives.

Blond has said of the last thirty years:

Under the auspices of both the state and the market, a vast body of disenfranchised and disengaged citizens has been constituted.  They have been stripped of their culture by the left and their capital by the right. 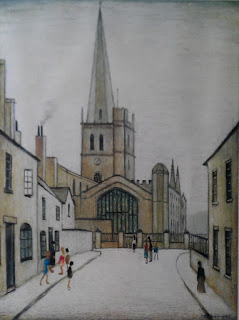 the weakening and destruction of the social bonds that create the communities within which we can flourish and prosper.

This is what makes 'progressive' Anglican critiques of economic insecurity and injustice, when combined with a celebration of social liberalism, little less than collusion with the liberal order: the weakening of cultural and communal cohesion is the social corollary of economic liberalism. Which is why classical Anglican social teaching is now particularly resonant, in that it addresses both community and market, culture and economics, recognising that economic and cultural security and flourishing are intimately related.