The Litany: no secular polity 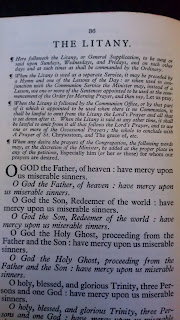 Here followeth the Litany, or General Supplication, to be sung or said after Morning Prayer, upon Sundays, Wednesdays, and Fridays ...


We sinners do beseech thee to hear us, O Lord God: and that it may please thee to rule and govern thy holy Church universal in the right way,


We beseech thee to hear us, good Lord.

Similarly, petitions for those who govern, magistrates, armed forces, and the peace of all nations are set alongside the petition for the Church's ministers:

That it may please thee to illuminate all Bishops, Priests, and Deacons, with true knowledge and understanding of thy Word; and that both by their preaching and living they may set it forth and shew it accordingly,


We beseech thee to hear us, good Lord.

There is a sense in which this ordering in contemporary versions of the litany embodies a secular logic, a liturgical laïcité.  By contrast, the Litany in the Prayer Book tradition - in which petitions for the state are included within the petitions for the Church - reflects what John Hughes termed "Anglicanism as integral humanism", in which our common life within the polity is understood as "flowing from and to him, who is the Alpha and Omega of all things".

The state is not, cannot be, 'secular'.  Our common life within the polity is both gift and vocation, to be ordered towards the common good.  Within the Church's proclamation, no space, no realm can be excluded from the Lordship of the Crucified and Risen One, who has said "All power is given unto me in heaven and in earth". While John Milbank was referring specifically to the coronation rite of a British monarch when he described the polity "as a body within the ecclesiastical body", there is a deep sense in which this is the calling of any polity, a calling to be reflected in the Church's prayer for the polity.

And he is before all things, and by him all things consist.
And he is the head of the body, the church.
This is definitively not a clericalist vision.  As Hughes reminds us, an Anglican integralism is akin to "a more Byzantine or Carolinian view of the priestly nature of 'secular' authority".  The monarch or president is thus prayed for, as also the legislature and the magistrates, because they are vocations and institutions with duties and obligations that are the gift of the Triune God.  The very fact that petitions for such offices and institutions within the polity are placed alongside - rather than separated from - petitions for the Church and her ministers is testimony to their integrity as gifts and vocations bestowed by God.  In fact, separating them from the petitions for the Church and her ministers can signal that are removed from the dynamic of vocation and gift, reducing them to mere secular phenomena. 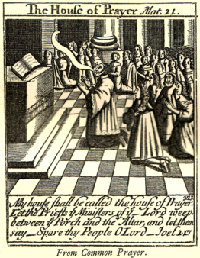 This is no less true in cultural contexts which are avowedly 'secular'.  Here the Litany's vision of "Anglicanism is integral humanism" can assist in addressing the contradictions and confusions of a political order which cannot provide a compelling, convincing account of the common good, authority, and obligations.

Rather than a political order shaped by the will to power and a public realm stripped of meaning beyond empty procedural norms, the Prayer Book tradition Litany - precisely because its prayers for the polity are included within and alongside petitions for the Church - sets before us an understanding of the polity shaped by vocation, gift, and duties flowing from and to the Author and Giver of Life, not set apart in a different realm outside this economy.

(Thoughts on the Litany in the Prayer Book tradition will be a regular focus of posts on Wednesdays.)