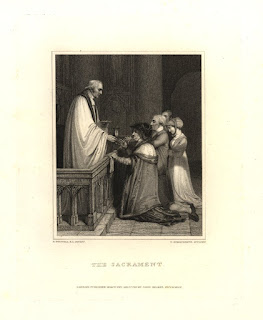 If Alexander Forbes embodied the Tractarian rupture, the rejection of High Church Eucharistic theology, his brother George embodied continuity with that tradition, witnessing to its continued vitality.

From Anglican Eucharistic Theology, here is George Hay Forbes from his work The Christian Sacrifice in the Eucharist, or the Communion Office of the Church of Scotland Conformable to Scripture and to the Doctrine and Practice of the Church of Christ in the First Four Centuries:

By the recital of the institution our commission to celebrate this mystery is declared; and by the words used by our Lord at the delivery of the gifts the bread and mixed wine are deputed to be, and are made, the pledges and representatives of Christ’s natural body crucified and dead, and of His blood shed for us; as such they are straightway, in accordance with Christ’s command, which had just before been recited, offered or given to God as a memorial of our Lord’s own oblation of Himself, with a thankful commemoration of what He did and suffered, and thus become truly a sacrifice of praise and thanksgiving.  God the Father is then besought to accept the sacrifice, and to send down upon the gifts the co-eternal Comforter, the Source and Fountain of all sanctification, by whom the body of Christ was formed in the womb of the ever-blessed Virgin, that He may perfectly sanctify and hallow them, and make the bread the body of Christ, and the mixed wine His blood, not only in symbol, type, and figure, but also in quickening energy, in spirit and power and efficacy, nay more, in such wise as no other thing in the whole creation, retaining its own proper substance and nature, can become another thing, and the precise mode and manner of which change is far above the comprehension, not only of men, but of angels also.

The references to the particular characteristics (the oblation and invocation in the prayer of consecration) of the Scottish Communion Office 1764 and the manner in which it differs from 1662 are obvious.  Note, too, the references to "the mixed wine", the mixed chalice introduced during the Usage controversy amongst Nonjurors.  While there was no such rubric in the Scottish Communion Office, the practice had become general amongst Scottish Episcopalians, in stark contrast to England where it was to become a mark of Ritualism.

Despite these liturgical differences, however, George Forbes offers a traditional High Church account of Virtualism: "pledges and representatives ... in spirit and power and efficacy", taking care to affirm that the elements retain their "proper substance and nature" (compare this with Seabury's "not indeed in substance, but in power and efficacy"). Similarly, his account of the Eucharistic sacrifice was typically High Church: "thankful commemoration ... a sacrifice of praise and thanksgiving".

As Nockles states, it was George - not Alexander - who "represented the genuine Nonjuring tradition in Scottish episcopalianism", part of the "near consensus" enjoyed in pre-1833 Anglicanism, embracing both the English rite and the Scottish/PECUSA rite.

Which means that we should be listening not to Alexander, but George.