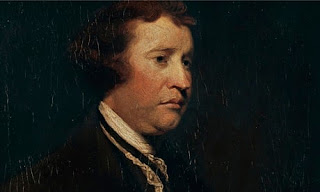 But if, in the moment of riot, and in a drunken delirium from the hot spirit drawn out of the alembic of hell, which in France is now so furiously boiling, we should uncover our nakedness, by throwing off that Christian religion which has hitherto been our boast and comfort, and one great source of civilization amongst us, and amongst many other nations, we are apprehensive (being well aware that the mind will not endure a void) that some uncouth, pernicious, and degrading superstition might take place of it - Edmund Burke, Reflections on the Revolution in France.

Theo Hobson's response to the Spectator interview with Justin Welby - "Who cares?" - started so well:

Sorry to sound sectarian, but the Archbishop of Canterbury should really be able to articulate a preference for Anglicanism over other variants of Christianity, including Roman Catholicism.

Unfortunately things do down hill at a scary pace after that opening line.  Hobson's conclusion is, well, as bland as the Archbishop's "who cares?":


So what is Anglicanism’s selling point? The answer is unfashionable but unavoidable: its socio-political liberalism ... The Church of England should unashamedly tell a story that middlebrow types will dismiss as ‘Whiggish’.

This is Davos Anglicanism.  And it takes an immense amount of wishful thinking to believe that it would aid the Church of England at this particular cultural juncture.

So if not Davos Anglicanism, what?

John Milbank's recent essay on 'Burke's Romantic Restoration of Natural Law' suggests an alternative to such a Whiggish conception of Anglicanism.  Mindful of the description given by Blue Labour's Maurice Glasman of Burke as the defender of "the meaningful and the real" (and thus a Whig-in-name-only), what would an alternative Burkean reading of the Anglican tradition look like?

Three particular characteristics of a Burkean Anglicanism can be taken from Milbank's excellent essay.

Firstly, in his discussion of the necessary "religious dimension of the state", Burke points to Anglicanism as a tradition which "nourishes the publick hope", as opposed to the affirmation of "modern humanism" which Hobson declares to be the vocation of Whiggish Anglicanism:

its participatory “connexion with the source and archetype of all perfection,” and secondly the liturgical need for an “oblation of the state itself, as a worthy offering on the high altar of universal praise.” And at this point Burke suggests that the “modest splendour, mild majesty” and “sober pomp” of Anglican worship and ceremonial “in buildings, in musick, in decoration, in speech, in the dignity of persons” is, in its very grace-given particularity, nonetheless the most natural political offering, just because its tempering of magnificence allows it to blend with the natural world and the natural order.

Secondly, reflecting how Anglicanism enables the universal truth of the Christian Faith to be embodied in a particular culture, Burke sets out how custom and tradition - "a habitual native dignity" are a participation in the divine life, rather than the abstraction of "metaphysic rights":

One can then suggest that it is grace and the economic operation of the Church that in Burke brings together the universal germs of natural law with the adherence to particular custom and tradition - since this is saved from a mere pragmatic conservatism of established regularity of habit, precisely insofar as it is a participation in the work of providence.

Thirdly, in what is in many ways a traditional High Church rebuttal of Erastianism, Burke defends the understanding that the Church incorporates the state, not the state the Church, opposing - in the words of the Reflections - "turning ... independent clergy into ecclesiastical pensioners of state".  The state is to be shaped by the Church's narrative, not the Church by the Enlightenment narrative of the state:

there are echoes, also, of the legacy of Richard Hooker. The independent material patrimony of the Church is seen as a guarantee of its non-subordination to Crown, Parliament or people and so of the foundation of state in Church, rather than the other way round.

Davos Anglicanism offers only a light-touch ecclesial echo of an exhausted liberal order, now exposed for its undermining of social, cultural, and economic solidarity.  Burkean Anglicanism, in contrast, embodies a richer, 'thicker' narrative than such Whiggish Anglicanism, with its empty progressive 'values' of the 'Church of Anywhere'.  Burkean Anglicanism is the 'Church of Somewhere', gathering up in common prayer a culture, a landscape, a polity, thereby manifesting - in C.S. Lewis's description of Hooker's vision - a universe 'drenched with deity'. 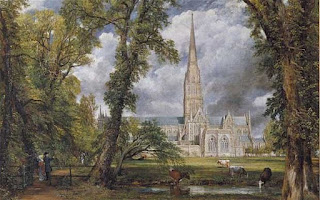 Such a Burkean Anglicanism - in its "grace-given particularity" - lives out a deeper wisdom than that offered by "an age of light/Light without love" (Keble).  In the words of another Milbank article:

what matters for Anglicans in the near future is finally to expunge from its midst the more heterodox and worldly-compromising notions of surviving whiggery, in order that Anglicanism can at last stand forth in its hidden coherence: radically biblical yet hyper-Catholic; sturdily incarnated in land, parish and work, yet sublimely aspiring in its verbal, musical and visual performances.

Then perhaps it will be able at last to contribute more unequivocally to the redemption of Britain [Ireland, Canada, the United States ...] and the Christian mission to the world.