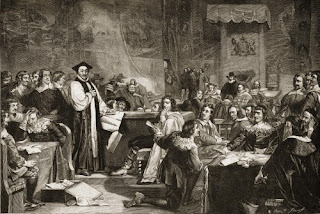 On this commemoration of his martyrdom, let us celebrate William Laud as a patron of Red Tory and Blue Labour, of those who drink from the well of Wendell Berry's agrarianism, those who are crunchy cons or Christian socialists.

For Laud the unity of the church rested not on narrowly defined dogma but on the community and uniformity of worship.  Attendance at the parish church and participation in a common prayer service conducted according to the canons and Book of Common Prayer of the Church of England were for him the hallmarks of membership of the Church of England.

Here is the Church of Somewhere, a communitarian vision of gathering up the relationships of family, neighbourhood, and realm in the life of Common Prayer.  In the Book of Common Prayer it gave expression to and shaped a native piety. This Laudian vision can be described in John Milbank's account of the "hidden coherence" of Anglicanism:

sturdily incarnated in land, parish and work, yet sublimely aspiring in its verbal, musical and visual performances.

Secondly, as George Yerby has indicated, Laud and Charles I defended an older, communal order of economic activity and ownership serving the common good against an emerging individualist, commercial, bourgeois, Puritan regime.  Jason Kirby particularly highlights his support for "the use of executive power ... to restrain landowners by by controlling food prices, wages, poor relief and enclosures".  As Laud declared in a sermon before the King in 1621:

If any man is so addicted to his private, that he neglect the common state, he is void of the sense of piety, and wisheth peace and happiness to himself in vain.

To again use the words of Milbank, Laud gives voice to "a practical critique of homo economicus".  Against what would become the Whig commercial state - what Canadian Anglican priest-poet Frederick George Scott would later call "the doctrine of the narrow state" - Laud urges the polity to be ordered towards cherishing and protecting the commonweal and the bonds of obligation, solidarity, and place.

Thirdly, in his defence of national churches, Laud indicates the theological roots of a deep respect for the community of the realm, its culture and customs.  Opposing the universal primacy of the Bishop of Rome, Laud said of the Church of England:

It is a national church, 'Our Church' (Scruton), that can sanctify our "sense of habitual native dignity" (Burke).  In the words of Addleshaw's classic reflection on the High Church tradition:

To them the idea of the Church under one earthly head and governed on one uniform pattern cuts across the natural groupings of humanity, which are themselves the work of the Logos.  It means the contradiction of man's innate social instincts ... The Church, instead of strengthening and supernaturalizing man's natural loyalties becomes in turn a source of division ... the Catholic Church is something which brings wholeness to society and brotherhood to man; it unifies all natural loyalties and places them in the supernatural setting of the Church ... Since England is a community with its own life, so the Church embracing this life is a community too.  The depth, the mystery of a nation's life, the veneration which men feel for it, they were able because of this identification to transfer to the Church.

In an age marked by a desire for a renewed sense of the commonweal, for thicker bonds of kinship and allegiance than can be imagined by the empty contractualism of the liberal order, for experiences of place and time which neither the Market nor technocrats recognise, Anglicanism in the North Atlantic world can too often appear to be part of that exhausted, empty liberal order.  As David Goodhart has said of a recent Lambeth Palace meeting to discuss Brexit:

The trouble with this bit of the Church is that they have turned themselves into a subaltern ideological sub-set of the Anywhere liberal class – the educated, mobile, secular, cognitive class, with its bias toward the rational, the open, the autonomous, the individual.

A Laudian Church, by contrast, is the Church of Somewhere, rooted and grounded in parish and Common Prayer, giving voice to the commonweal, sanctifying the life of the realm.  It would, then, be a Church capable of responding to the cultural yearning for identity, meaning and solidarity, for a renewed experience of place, the common good, and polity.

Laud, the Red Tory or Blue Labour Archbishop, is a teacher and martyr for our times.

(The illustration is Alexander Johnstone, 'The Trial of Archbishop Laud', 1849.)