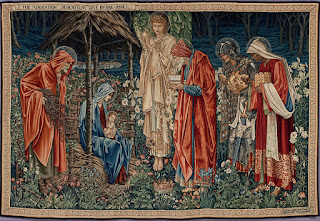 We might think that there is an embarrassment concerning the West's traditional celebration of the Epiphany.  This is also detected in how, for example, Common Worship replaces the Prayer Book tradition's Sundays 'after the Epiphany' with Sundays 'of Epiphany'.  (Thankfully this is not the case in either TEC 1979 or Ireland 2004.)  The significance of the change is obvious.  Epiphany is a season - not the Epiphany, the feast celebrating the visit of the Magi to the Christ Child.

The idea of an Epiphany 'season' has not been without critics.  In their Alcuin Liturgy Guide on Advent to Candlemas, Benjamin Gordon-Taylor and Simon Jones state, "such an elision of themes might be thought somewhat contrived".  More significant than this, however, is the obscuring of the the feast of the Epiphany itself.  In the West, the visit of the Magi was clearly established as the heart of the feast by the 5th century, as can be seen from the Epiphany sermons of Leo the Great:

For it concerns all men's salvation, that the infancy of the Mediator between God and men was already manifested to the whole world, while He was still detained in the tiny town. For although He had chosen the Israelitish nation, and one family out of that nation, from whom to assume the nature of all mankind, yet He was unwilling that the early days of His birth should be concealed within the narrow limits of His mother's home: but desired to be soon recognized by all, seeing that He deigned to be born for all. To three wise men, therefore, appeared a star of new splendour in the region of the East.

This, by the way, vindicates the title given by the Prayer Book tradition to the feast: "The Epiphany, or the Manifestation of Christ to the Gentiles".

Having captured the popular imagination over centuries, this theme continues to resonate in the popularity of 'We Three Kings' at carol services, the characters of the Magi in Nativity plays, and - even in the secular UK - media commentary on the Epiphany.  As the tabloid Daily Star noted this week: "The Twelfth Night marks the beginning of Epiphany, the Christian feast day when the wise men visited Jesus, which falls on January 6".

Then, of course, there is the enduring popularity of Eliot's 'The Journey of the Magi', itself evidence of the imaginative power of celebrating the Epiphany in the depths of winter, as articulated by Lancelot Andrewes:

A cold coming they had of it at this time of the year, just the worst time of the year to take a journey, and specially a long journey. The ways deep, the weather sharp, the days short, the sun farthest off ... the very dead of winter ...

And we, what should we have done? Sure these men of the East will rise in judgment against the men of the West, that is with us, and their faith against ours in this point ... Our fashion is to see and see again before we stir a foot, specially if it be to the worship of Christ. Come such a journey at such a time? No; but fairly have put it off to the spring of the year, till the days longer, and the ways fairer, and the weather warmer, till better travelling to Christ. Our Epiphany would sure have fallen in Easter week at the soonest.

Deeply resonant, celebrated in popular religious practice over centuries, and still firmly established in the popular imagination, the Epiphany as the visit of the Magi to the Christ Child should be a fixed feature of Anglican liturgy.

Why, then, the desire to displace it?  Two reasons might be suggested.  Firstly, there was a tendency in recent liturgical revision to regard the Christian East as the bastion of pure, pristine liturgical observance.  This was particularly evident regarding the Epiphany, with a rich, native observance, and its practices and spirituality, obscured in the pursuit of an ahistorical liturgical primitivism.

Secondly, it is difficult not to also detect a distate for popular religion.  This distate is also evident in the displacing of Stir-up Sunday.  And, of course, the contemporary language version of the Lord's Prayer is the poster-boy for this dislike for popular religion. Here is liturgy a la Hauerwas - for a sectarian community rather than a national church unembarrassed in its commitment to capturing the imagination of the culture.

An obsession with the East and a hostility to popular religion.  Perhaps a somewhat harsh judgment, but it does explain liturgical revision obscuring a well-established feast with deep cultural resonances.  It contrasts with the joy of a Prayer Book Epiphany, and how this has been given expression in the carols, customs, and art of the feast.

So, forget the Grinch's liturgical friends who have sought to steal the Epiphany.  Have a Prayer Book Epiphany.

O God, who by the leading of a star didst manifest thy only-begotten Son to the Gentiles: Mercifully grant, that we, which know thee now by faith, may after this life have the fruition of thy glorious Godhead; through Jesus Christ our Lord. Amen.

(The illustration is Edward Burne-Jones, 'The Adoration of the Magi', 1904.)