"For what is called Freedom": John Keble and the political theology of 30th January 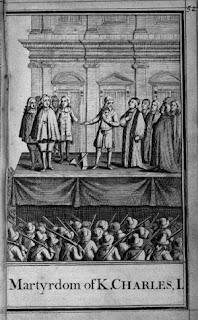 In his 1831 sermon on the Anniversary of the Martyrdom of King Charles I, John Keble defended the commemoration against charges that it had "become superfluous and unmeaning" in a society defined by 'freedom' and 'liberty'.  He notes how an empty, contentless concept of liberty disorders society:

Do not men, somehow, think of liberty, as of ...  something the mere pursuing of which, for its own sake, is a part of virtue? ... Though men commit things worthy of death, yet if they be done for freedom’s sake, the world finds pleasure in them that do them.

Against this, Keble points to the service for 30th January as calling us towards a richer, 'thicker' understanding of the polity, shaped and sustained by the mutual obligations of subjects and rulers, in common service to the "civil welfare":

For what are the undisputed recollections of the day? A Christian King, as pure and devout in his daily life as any character that adorns history, is brought to trial by his own subjects, for refusing to sacrifice his persecuted friends, and the Church of his country; is condemned and executed with circumstances of insult, inexcusable though offered to the vilest malefactor. All this is done for liberty'’s sake: and within a few months the same people, who could not endure his doubtful prerogative, shall be seen crouching at the footstool of his murderer, a notorious usurper and tyrant ...


Thus, in regard of the fatal precedent by which our history was this day stained: we are told over and over again, that the season had come round, in a kind of moral cycle, when there could not but be a revolution: that the King was in some sort fairly punished for not understanding the times better: that it was indeed much to be regretted, but could not be helped, and had better be borne with, in consideration of greater benefits ensuing.

It is something, at all events, to have upon record the deliberate protest of the Church of England against these lessons of base accommodation: something, that those who are yet willing to take advice from her Prayer-Book, should find there the good old principles, of plain submission and cheerful obedience, applied to a real and near example, and a condition of society like the present ...

But if all this must still be unheard, —if the instruction of the day be quite drowned, in men'’s eager cry for what is called Freedom: at least the service answers the purpose of a solemn appeal from human prejudice, to Him, before whom king and subject must ere long appear together.