"A quasi dogmatic character": Alexander Forbes and the need for the Articles of Religion 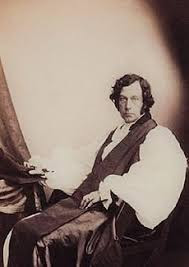 Alexander Forbes, Scottish Episcopalian Bishop of Brechin, wrote his An Explanation of the Thirty-Nine Articles in 1871.  As an influential Tractarian, it would be expected that, following the Tract XC controversy, he would not be eager to revisit a painful and divisive episode in the history of the movement.

That discomfort we would reasonably expect to be increased considering that subscription to the Articles was a relatively new development in Scottish Episcopalianism.  It was a mere 67 years previous to the publication of An Explanation that, at the Synod of Laurencekirk in 1804, subscription to the Articles was required - a means of addressing historic concerns about the nature and loyalty of Scottish Episcopalianism.

To which we might add that Forbes belonged to a minority within Scottish Episcopalianism. Nockles reminds us that when controversy flared over Eucharistic doctrine in 1857, Forbes was publicly condemned by his fellow bishops and, indeed, by his brother, George Hay Forbes.  As Nockles states:

There was also a gulf between the authentic [Scottish Episcopalian] Nonjuring doctrine and that of Pusey's leading Scottish episcopalian follower, Alexander Penrose Forbes.

The shadow of Tract XC, the Articles being peripheral to the Scottish Episcopalian experience, and Forbes being outside the mainstream of that tradition, all suggests that there were very good reasons for him not addressing the issue.

But address it he did - and in a manner that, initially, was likely to be considered less than helpful to the concerns of Scottish Episcopalianism and, indeed, Tractarianism. Forbes opened An Explanation with an 'Epistle Dedicatory' to Pusey, stating that he was "trained in your school of thought".  Here, then, was an explicitly Puseyite statement on the Articles.

Echoes of Tract XC can be detected throughout.  The reading of the Articles offered by the "High Church school" was explicitly criticised.  They are "Articles of Religion ... not Articles of Faith in any strict sense".  Thus, "we must assign to the Articles a subordinate place in their claim upon our submission".  And in language which had become highly charged since Tract XC, Forbes insisted - using the same formulation employed by Newman - that "the Articles [must] be interpreted in the Catholic sense".

Much of this wording is from an extract from his 1857 Charge the matter of "the position of the Articles of Religion", nearly two pages in the Epistle Dedicatory.  However, Forbes then stated:

On serious reconsideration I have no wish to modify or to alter the substance of what I then said on this subject ...

This alerts us, of course, to an author's desire to - at the least - nuance his views.  His Charge declared that the Articles were "subordinate", the work of a "legislature" which cannot be an "ultimate reference in matters of faith", and so variously interpreted that it would be "absurd" to hold that they are "the only rule of faith in the Church".

After alerting the reader to his desire to nuance the views set forth in his earlier Charge, Forbes continues:

but since these words were written, it is to be observed, that an influential school in the Church of England has made an attempt, and to a degree succeeded, in modifying in some instances the stringency of subscription.  With some it is, almost confessedly, an attempt to introduce the thin end of the wedge to abolish subscription altogether.  I confess that, in the present circumstances of our Church, I am not prepared to advocate so sweeping a measure.

it will be seen what a vast amount of Christian truth the Articles of Religion cover; how they may be turned from the transitory controversies of the sixteenth century to those immutable truths which have been taught in the Church, and by the Church, in all ages; how they may be made the means of supplying that great want from which our divines at present suffer, the want of an accurate theology; for it cannot be denied that much of the vague, incorrect, and imperfect statement of the truth in the present day, is the result not of unbelief, or misbelief, or any conscious perversity of will in the matter of divine faith, but simply of want of clear-headedness and precision.

The change of emphasis is quite stark - from addressing "a peculiar set of circumstances" to declaring "those immutable truths which have been taught ... in all ages"; from "being swayed by very different influences" in their construction to being a model of "clear-headedness and precision" in theology.

What has brought about this change?  Forbes identifies those who have sought to weaken subscription:

Forbes's renewed appreciation from the Articles flows from his concern to preserve the dogmatic heart of catholic Faith.  He continues:

in the present circumstances of the English Church, subscription to the Articles should be maintained; for some test, having a quasi dogmatic character, seems necessary to our position; and the difficulties of any substitution seem, at this moment, insuperable.

Here is a stark change.  In his Charge Forbes declared, "we must assign to the Articles but a subordinate place in their claim upon our submission".  Now, however, he gives to them "a quasi dogmatic character", subscription to which, he insists, should not be compromised.

Forbes outlines a robust case for the continuing significance of the Articles of Religion for Anglicanism.  If he was struck by "the want of an accurate theology" in the Anglicanism of the 1870s, it is not too difficult to imagine his despair at what John Milbank has termed the "theological incoherence" of early 21st century Anglicanism. 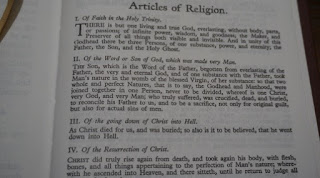 Too often the heirs of Forbes - today's Anglo-Catholics (including Milbank) - dismiss the Articles on similar grounds to those invoked in his 1857 Charge.  In doing so, they contribute to the very "theological incoherence" which is a cause of frequently expressed Anglo-Catholic dismay.  What is instead needed is attention to Forbes's later recognition of the relevance and significance of the Articles, with their "quasi dogmatic character" providing a means of renewing the Anglican centre around the "immutable truths which have been taught in the Church, and by the Church, in all ages".