"Not to satisfy her importunity": the Blessed Virgin and the miracle at Cana of Galilee 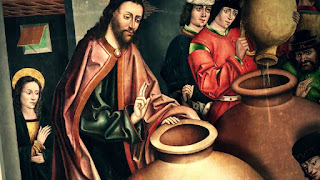 Yesterday's Gospel reading in the lectionary of the Prayer Book tradition, for the Second Sunday after the Epiphany, was the miracle at Cana of Galilee, John 2:1-11 (as also in the traditional lectionary of the Latin West).  The presence of the Blessed Virgin Mary at this, the first of the signs in St John's Gospel, has led to a tradition of Marian reflection regarding the passage.  Thomas Aquinas, for example, states that Mary's role in the passage reveals that "it is through her intercession that one is joined to Christ through grace".  He continues:

In Mary’s intercession, note first her kindness and mercy ... And so because the Blessed Virgin was full of mercy, she desired to relieve the distress of others.

Similarly, Conrad of Saxony (a 13th century Franciscan) points to the passage in support of his description of the intercession of the Blessed Virgin:

In her direct relations with us, she shows her mercy ... by consoling us in our troubles, by helping us with our necessities, by freeing us from eternal damnation, and by rewarding us for our service with the reward of the beatific vision after this life.

By contrast, classical Anglican reflection on this passage demonstrates no such concern.  In his Christmas Day Sermon 1625, John Donne uses the passage to address the reality of the Incarnation, a reality captured by the use of the term "Woman":

The spirit of God foresaw that the issue between the church and the heretics would not be Virgin or no Virgin, but whether Christ were made of a woman.

"Woman", in other words, captures the flesh-and-blood reality that a woman gave birth to the Incarnate Word.  It is worth noting that in this sermon Donne also robustly affirms the perpetual virginity of Mary: "She was then, and she was always a virgin".  He also declares: "he exempted his blessed mother more than any from sin".

For Jeremy Taylor in The Great Exemplar, the Blessed Virgin's request to the Lord at the marriage in Cana is no example of intercession.  The Lord's answer to her request shows "that the work He was to do was done not to satisfy her importunity, which is not occasion enough for a miracle, but to prosecute the great work of divine designation".  Taylor goes on to emphasise this by ascribing the Lord's relationship with His Mother to the social rather than spiritual realm:

For in works spiritual and religious all exterior relation ceases.  The world's order, and the manner of of our nature, and the infirmities of our person, have produced societies, and they have been the parents of relation; and God hath tied them fast by the knots of duty, and made the duty the occasion and opportunities of reward; but in actions spiritual, in which we related to God, our relations are founded upon the Spirit, and therefore we must do our duties upon considerations separate and spiritual, but never suffer temporal relations to impede our religious duties.

As with Donne, Taylor also affirms Mary's perpetual virginity and says of the Lord's conception in her womb, "here sin was no relative, and neither was it in the principle nor in the derivative ... in the root nor in the branch" (The Great Exemplar I.III.3).  It is not, then, because of any lack of reverence for the Blessed Virgin, or any embarrassment over affirming a traditional piety, that Taylor also refuses to see in this text an intercessory role for Mary.

So what is happening?  Why do Donne and Taylor refuse to accept the late medieval Latin reading of the passage?  In both Donne and Taylor we see a retrieval of patristic readings of the miracle at Cana.  In Augustine's preaching on the passage, he regards the Lord's use of the term "Woman" to be a means of drawing us more deeply into the mystery of the Incarnation.

The Lord's response to the Blessed Virgin, says Augustine, is witness to the truth of His two natures:

While we may have some questions about Augustine's Christology at this point, the key point is what he regards to be the focus of St John's account.  As with Donne, Augustine expounds the passage with reference to the person of the Incarnation of the Word, rather than a more elaborate Marian interpretation.

In Chrysostom we see similarities with Taylor's approach:

The request ought to have come from those who needed, not from His mother. And why so? Because what is done at the request of one's friends, great though it be, often causes offense to the spectators; but when they make the request who have the need, the miracle is free from suspicion, the praise unmixed, the benefit great. So if some excellent physician should enter a house where there were many sick, and be spoken to by none of the patients or their relations, but be directed only by his own mother, he would be suspected and disliked by the sufferers, nor would any of the patients or their attendants deem him able to exhibit anything great or remarkable. And so this was a reason why He rebuked her on that occasion, saying, Woman, what have I to do with you? instructing her for the future not to do the like; because, though He was careful to honor His mother, yet He cared much more for the salvation of her soul, and for the doing good to the many, for which He took upon Him the flesh.

Rather than being an example of the power of Marian intercession, for Chrysostom - as with Taylor - it was an incident which demonstrated quite the opposite.  In Taylor's words, the miracle "was done not to satisfy her importunity".  For Chrysostom, "The request ought to have come from those who needed, not from His mother".

When compared to the late Medieval Latin reading of the miracle at the wedding of Cana of Galilee, the classical Anglican reading - with its refusal to see a foundational example of Marian intercession - is neither impoverished nor flattened. Rather, it is a retrieval of patristic readings, a reading of Saint John's Gospel in communion with Saint Augustine and Saint Chrysostom.  What is more, it is a reading which does not detract from or undermine a piety which reverences the Blessed Virgin Mary, with her perpetual virginity and her sanctity signs and witnesses to her role in the mystery of the Incarnation.

It is a reminder that the reserve and reticence of classical Anglican Marian piety has deep roots.