"Another Epiphany": Donne on the receiving of the blessed Sacrament 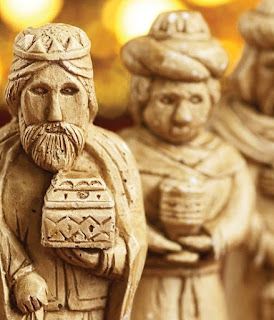 In his 1626 Christmas Day sermon, John Donne referred to the ancient practice of describing the Lord's Nativity as His 'Epiphany':

And as even his birth is his death, so every action and passage that manifests Christ to us, is his birth, for Epiphany is manifestation; and therefore, though the church do now call Twelfth-day Epiphany, because upon that day Christ was manifested to the Gentiles in those wise men who came then to worship him, yet the ancient church called this day (the day of Christ's birth) the Epiphany, because this day Christ was manifested to the world, by being born this day.

He then applied the term to the receiving of the holy Sacrament on Christmas Day:

The Eucharist, then, is an Epiphany beheld "with bodily eyes":

Beloved, in the blessed, and glorious, and mysterious Sacrament of the body and blood of Christ Jesus, thou seest Christum Domini, the Lord's salvation, and thy salvation; and that thus far with bodily eyes, That bread which thou seest after the consecration is not the same bread which was presented before; not that it is transubstantiated to another substance, for it is bread still ... but that it is severed, and appropriated by God in that ordinance to another use.

This Reformed account of the Eucharist - Donne rejects both "a transubstantiation, and a consubstantiation" - he robustly presents as in accordance with the teaching of the Fathers:

But yet though this bread be not so transubstantiated, we refuse not the words of the fathers, in which they have expressed themselves in this mystery. Not Irenaeus's est corpus, that that bread is his body now; not Tertullian's fecit corpus, that that bread is made his body which was not so before; not St. Cyprian's mutatus, that that bread is changed; not Damascen's super naturaliter mutatus, that that bread is not only changed so in the use, as when at the king's table certain portions of bread are made bread of essay, to pass over every dish, whether for safety or for majesty; not only so civilly changed, but changed supernaturally; no nor Theophylact's transformatus est, (which seems to be the word that goes farthest of all,) for this transforming cannot be intended of the outward form and fashion, for that is not changed; but be it of that internal form, which is the very essence and nature of the bread, so it is transformed, so the bread hath received a new form, a new essence, a new nature, because whereas the nature of bread is but to nourish the body, the nature of this bread now is nourish the soul; and therefore [quoting Augustine], Cum non dubitaxit Dominies dicere, hoc est corpus meum, cum signum daret corporis, Since Christ forbore not to say, This is my body, when he gave the sign of his body, why should we forbear to say of that bread, This is Christ's body, which is the Sacrament of his Body.

Three things come to mind in reading this marvellous sermon's references to the Eucharist.

Firstly, Donne declares that in the "the most blessed Sacrament" we enter into the encounter and experience of the Epiphany: we are "admitted to thy Epiphany, and manifestation of Christ in the Sacrament".  The Eucharist is "this Epiphany", "my Epiphany".  Here Donne reveals how the liturgical year continued to profoundly shape the imagination and spirituality of the reformed ecclesia Anglicana.  This was the fruit of the Book of Common Prayer retaining the traditional pattern of the Christian year, with its feasts and fasts. Donne, indeed, points to that traditional pattern in his sermon:

as the church prepares our devotion before Christmas-day, with four Sundays in Advent, which brings Christ nearer and nearer unto us, and remembers us that he is coming, and then continues that remembrance again with the celebration of other festivals with it, and after it, as St. Stephen, St. John, and the rest that follow.

In this regard, it is worth noting that Donne's reflection on the relationship between Epiphany and the Sacrament was also seen in Andrewes's 1620 Christmas Day sermon, with Matthew 2:1-2 as his text:


And in the old Ritual of the Church we find that on the cover of the canister, wherein was the Sacrament of His Body, there was a star engraven, to shew us that now the star leads us thither, to His body there.

And what shall I say now, but according as St. John saith, and the star, and the wise men say, Come. And He, Whose the star is, and to Whom the wise men came, saith, Come. And let them who are disposed, Come. And let whosoever will, take of the Bread of Life, which came down from Heaven this day into Bethlehem, the house of bread. Of which Bread the Church is this day the house, the true Bethlehem.

Sermons such as these by Andrewes and Donne - dramatic, imaginative preaching of the Christian year - go some way to explaining how the Puritan assault on Christmas in particular, and the liturgical year in general, failed.

Secondly, Donne's Eucharistic teaching in this sermon exemplifies how a thoroughly Reformed understanding of the Sacrament could lead to a vibrant, rich Eucharistic devotion.  There can be no mistaking that this is Reformed Eucharistic doctrine:

We say the Sacramental bread is the body of Christ, because God hath shed his ordinance upon it, and made it of another nature in the use, though not the substance.

Too often Duffy's The Stripping of the Altars is assumed to demonstrate that the Reformation and Elizabethan Settlement resulted in the loss of the vivid Eucharistic experience of the pre-Reformation era.  Donne's sermon points to a very different theological and devotional landscape, in which the Eucharistic experience was actually intensified.  After all, receiving the Sacrament on Christmas Day was not an experience known to the laity in the pre-Reformation Church.  They would not have known "this Epiphany".

Thirdly, Donne's affirmation of patristic teaching as cohering with the Eucharistic teaching of the Elizabethan and Jacobean ecclesia Anglicana reflected a well-established approach.  It can be seen in Cranmer's A Defence of the True and Catholick Doctrine of the Sacrament of the Body and Blood of our Saviour Christ and in Hooker's Lawes.  For Cranmer, the Reformed teaching accorded with "the faith and doctrine of the old authors of Christ's church".  Similarly with Hooker:

In a worde it appeareth not that of all the ancient fathers of the Church anie one did ever conceive or imagin other onlie a mysticall participation of Christes both bodie and blood in the sacrament ... [not that] it was theire meaninge to perswade the world either of a corporall consubstantiation of Christ with those sanctified and blessed elementes before wee receive them, or of the like transubstantiation of them into the bodie and blood of Christ - V.67.11.

And just as Donne concludes his overview of the Fathers by emphasising St Augustine's teaching, we also see this emphasis in Cranmer:

And yet most plainly of all other, St. Augustine doth declare this matter ...

And yet St. Augustine sheweth this matter more clearly and fully than any of the rest.

Here is the root of the richness of the Eucharistic teaching and piety in the Elizabethan and Jacobean Church - the retrieval of an Augustinian understanding of the Sacrament.