"Of the substance of the Virgin Mary his mother": Cranmer's Christmas preface 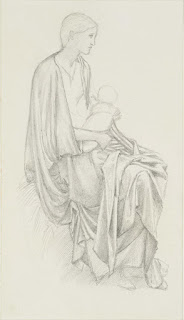 1552 & 1559:
Upon Christmas daye, and seven dayes after.
BECAUSE thou diddest geve Jesus Christ, thine onely sonne, to be borne as this daye for us, who by the operacion of the holy goste, was made very man, of the substaunce of the Virgin Mary his mother, and that without spot of synne, to make us cleane from al synne.

1662:
Upon Christmas Day, and seven days after.
BECAUSE thou didst give Jesus Christ thine only Son to be born as at this time for us; who, by the operation of the Holy Ghost, was made very man of the substance of the Virgin Mary his mother; and that without spot of sin, to make us clean from all sin. Therefore with Angels, &c.

Notice what Cranmer introduces into the proper preface, missing from the traditional form.

Firstly, there is an explicit expression of sacred time: "this day" in 1552/59 and "at this time" in 1662.  This echoes the pre-Reformation popular piety and traditional devotion surrounding Christmas.  The fact that the phrase is also found in the collect of the Christmas octave gives further emphasis to how the proper preface embodies the experience of sacred time and affirms how traditional piety celebrated the Nativity.

Secondly, the role of the Blessed Virgin Mary is given deep and profound expression, a fulsome statement of orthodox, catholic, conciliar teaching on Mary's place in safeguarding the reality of the Incarnation.  Mindful of the magisterial Reformation's robust rejection of the Radical Reformation's restatement of the old Christological heresies - invariably associated with denials of the virginity of the one the magisterial Reformer's incessantly titled the Blessed Virgin - the proper preface staunchly reiterates the importance of Mary in the Incarnation.  It is also worth noting that the Marian emphasis in much popular pre-Reformation piety around the celebration of the Nativity did not prevent Cranmer from reasserting her significance to the confession of the Incarnation.

Thirdly, Cranmer's proper preface clearly presents to us the Incarnation as oriented to the Passion.  This captures an enduring focus of teaching on the Incarnation.  As Balthasar puts it, summarising both the Greek and Latin Fathers:

the Incarnation is ordered to the Cross as to its goal ... he who says Incarnation, also says Cross.

This has particular significance, Balthasar urges, in challenging those all-too evident contemporary theologies which suggest that "redemption was basically achieved with the Incarnation itself".  Cranmer's emphasis has especially deep roots in the Augustinian tradition of the Latin West: in Anselm's insistence that the answer to cur Deus homo? is the salvific need for the Passion, in Thomas pointing to John 1:29 in explanation of the fitness of the Incarnation (ST III.1.4).  Hooker also echoes this when he declares that we need the sacraments to participate in the saving sacrifice of the Lord because the fact of the Incarnation alone does not suffice:

It is too cold an interpretation, whereby some men expound our being in Christ to import nothing else, but only that the self same nature, which maketh us to be men, is in him, and maketh him as we are.  For what man in the world is there which hath not so far forth communion with Jesus Christ? It is not this that can sustain the weight of such sentences [in Scripture] as speak of the mystery of our coherence with Jesus Christ (LEP V.56.7).

Put together, then, these three aspects point to the richness of Cranmer's proper preface for Christmas Day and its octave: richer than both the traditional Latin version and contemporary Anglican alternatives.  Take, for example, one of the (seven) prefaces offered in Common Worship:

And now we give you thanks
because in coming to dwell among us as man,
he revealed the radiance of your glory
and brought us out of darkness into your own marvellous light.

Here there are no references at all to sacred time, the Blessed Virgin, or the Incarnation as ordered towards the Passion.  Common Worship does offer a preface similar to Cranmer's, but with a not insignificant omission:

And now we give you thanks because,
by the power of the Holy Spirit,
he took our nature upon him
and was born of the Virgin Mary his mother,
that being himself without sin,
he might make us clean from all sin.

Missing is the glorious flesh-and-blood physicality of Cranmer's "of her substance".  The Common Worship version fails to definitively declare that the Lord's assumption of our nature was His taking flesh of the Blessed Virgin, "her substance".  Common Worship has Mary as an after-thought: Cranmer leaves us in no doubt of her centrality to the Incarnation.

The richness of Cranmer's proper preface for Christmas Day and its octave is a means of enabling the Anglican tradition to more deeply rejoice during Christmastide, celebrating sacred time and the role of the Blessed Virgin, and bringing us to behold the mystery of the Incarnation as oriented towards the Passion of the Lord.  Whether or not it is used in liturgical celebrations we may be attending tomorrow - the octave day of Christmas Day - we can contemplate it in prayer and preparation for the Sacrament, rejoicing that "as at this time", the eternal Word assumed flesh of the substance of the Blessed Virgin Mary, and lay in the wood of the Crib in preparation for the wood of the Cross, for us and our salvation.

(The illustration is an 1887 study of the Virgin and Child by Edward Burne-Jones.)