"The well-known words return": Newman and a Prayer Book Advent 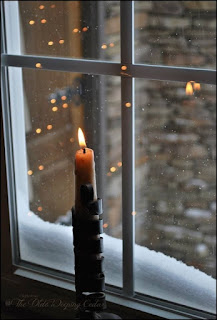 Last week I quoted words from Edward White Benson in 1848, referring to the power of the dignified simplicity of the Advent provision in the BCP 1662.  The very sparseness gleefully abandoned by late 20th and early 21st century liturgists was regarded by Benson as the enriching and rewarding characteristic of a Prayer Book Advent.

We also see something of this in an Advent sermon of John Henry Newman (PPS 5:1).  The sermon begins with Newman evocatively describing December's winter weather and the passing of the year:

Year after year, as it passes, brings us the same warnings again and again, and none perhaps more impressive than those with which it comes to us at this season. The very frost and cold, rain and gloom, which now befall us, forebode the last dreary days of the world, and in religious hearts raise the thought of them. The year is worn out: spring, summer, autumn, each in turn, have brought their gifts and done their utmost; but they are over, and the end is come. All is past and gone, all has failed, all has sated; we are tired of the past; we would not have the seasons longer; and the austere weather which succeeds, though ungrateful to the body, is in tone with our feelings, and acceptable. Such is the frame of mind which befits the end of the year; and such the frame of mind which comes alike on good and bad at the end of life. The days have come in which they have no pleasure; yet they would hardly be young again, could they be so by wishing it. Life is well enough in its way; but it does not satisfy.

The gloom of winter and the year's passage, however, Newman contrasts with the Advent proclamation in the Prayer Book:

One year goes and then another, but the same warnings recur. The frost or the rain comes again; the earth is stripped of its brightness; there is nothing to rejoice in. And then, amid this unprofitableness of earth and sky, the well-known words return; the Prophet Isaiah is read; the same Epistle and Gospel, bidding us "awake out of sleep," and welcome Him "that cometh in the Name of the Lord;" the same Collects, beseeching Him to prepare us for judgment. O blessed they who obey these warning voices, and look out for Him whom they have not seen, because they "love His appearing!"

As Newman indicates, the power of the Prayer Book provision for the season lies in its rigorous focus on the Scriptural proclamation of the Advent of the Lord and the manner in which this is summarised in the collects.  Note too how he implies the strength inherent in this provision being unchanging year from year, "the well-know words return": a the Prayer Book provision ensures a yearly catechesis on the Lord's Advent.

It is noteworthy that, as with Benson, Newman's account of the power of a Prayer Book Advent long pre-dates the liturgical changes and additions of Ritualism.  In fact, Newman's sermon dates to the late 1830s, a decade before Benson's comments.  Also significant is that they both also pre-date the revival of seasonal hymnody and - certainly in Newman's case - the introduction of basic liturgical seasonal colours.

Both sets of comments, in other words, are suggestive of an inherited perception of the characteristics of a Prayer Book Advent, rather than a new post-1833 insight: in both cases, Advent was being observed as it would have been by very many parsons and parishes in the late 18th and early 19th centuries, without additions to the Book of Common Prayer.  Newman's observations on the character of Advent are quite conventional, to be found in most 18th century commentaries on the Prayer Book Collect, Epistles, and Gospels for the Sundays of Advent.  There are, for example, distinct echoes in Newman's sermon of Horne, writing in the 1770s:

often as this season returneth, the Church secondeth the call. Her services dispel the gloom of melancholy, and put gladness into the hearts of all her children. They are wonderfully calculated to renew good impressions in our minds, to increase our faith, to invigorate our hope, to blow up the sacred fires of devotion and charity, and to fill us with holy and heavenly tempers (quoted in Mant's Notes, 1820).

Newman, standing in continuity with the older tradition of High Church commentary, is another witness to the power of the dignified, rigorous simplicity of a Prayer Book Advent.