"A time chosen by the Church's wisdom and authority for fasting and prayers": a Restoration-era Rogationatide sermon 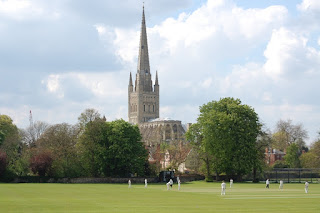 From a 1677 Rogationtide sermon preached in Norwich Cathedral.  The sermon opens with an explanation of the Rogation Days:
If because there appear some remarks of ancient Solemnity upon this time, and because the established Liturgy doth oblige us to a religious regard to it, any man should inquire after the reason and intention of both, the question will be easily solved, if he do but heed the name and appellation of it, as it is commonly called the Rogation-week, or the Week of Prayers, that is, a time chosen and separated by the Church's Wisdom and Authority for Fasting and Prayers, the more solemnly to implore the mercy of God upon the World at a season, when commonly the rage of Epidemic diseases takes its beginning, the fruits of the Earth are in greatest danger to miscarry, and Wars are then ordinarily commenced, and Campaigns opened. Now this pious custom was so early an off-spring of Primitive Devotion, that it was made a Constitution of the Church from a considerable Antiquity.
Interestingly, the preacher first referenced global concerns in explaining the observance of Rogationtide:
That if ever there were an Age that called for this kind of Charity, and might lay claim to the benefit of a Week of Rogations, and all other the constantly performed offices of prayers for the good of Mankind, as necessary; it is now certainly the most proper time: the sad face, and deplorable state of the Christian World, every where do now require it, now implore it.
And first the deeply afflicted Asiatic and Grecian Churches, the first Plantations of Christ and his Apostles, that have so long groaned under the heavy oppressions of him that bids defiance to the Christian name, lays claim to the Charity of your Prayers. But those Barbarians late approaches and successes must alarm your pity, if you can but consider the Hungarian and Polonian calamities.
But if these distant accents of sorrow cannot reach your hearts, yet let the near and loud Cry of those neighbouring Countries, that are harassed and undone by the conflicting Legions of so many Princes now engaged in War, awaken you to your most compassionate Prayers.
Let us have a care, that those poor ruined Countries may not take up Jerusalem's Lamentation against us, O all ye that not only pass, but live by us, have ye no regard?
Turning to home, he points to Rogationtide as a call to charity in the social order:
And if there were nothing but the common miseries of Mankind among us, such as usually and universally follow Nations in their best peace and prosperity, yet no pious and considerate mind could want a sufficient subject matter for such offices of his Charity: Let us but consider how many poor Prisoners are now sorrowing in their strait confinements, how many of our brethren are roaring in torments, languishing in diseases, pinched with penury, struggling with difficulties to live, and in a thousand cases of distress, are crying for help in the bitterness of their Souls. And can we think there's never a tear, never a petition due? Do these need no share in a time of Prayer, no concern in the offices of our daily Devotions?
Thankful for the stability of Restoration England after the deluge of the 1640s and 50s, he echoes an old Rogationtide theme, seen in the Homily for the Rogation procession, of "ancient bounds and limits" and applies it to the need to preserve the good order of the commonwealth, such order itself being an expression of charity:
For though God hath blessed us above any people of the World, under the happy Government of a gracious Prince, who hath wisely provided for our peace and plenty, when all the World besides are tossed up and down in miserable circumstances, yet are there no just fears, no real dangers set before us, for which it is needful to implore the mercy of a good God to prevent the approaches of many likely ensuing troubles? Yes certainly, no Nation in prosperous circumstances could ever offer a prospect of more to a considering mind.
Who can but suggest to himself thoughts of danger to the State, when he shall behold so considerable a part of the people to be so malicious to their Rulers of every kind, so seditiously disposed against all just Rules of Government, so wretchedly intractable to all Laws for subjection and obedience, so unfaithful to all the Sacred obligations of Oaths, and ties of Conscience, and moreover so universally immoral and vicious, that we look like a people preparing ourselves for our own ruin, if God prevent it not? The Charity of your Prayers is here seasonable, if you have any design of doing good to yourselves and Country.
The sermon exemplifies the seriousness of Rogationtide observance in the Restoration Church.  Also of significance is how it demonstrates the meaning of the Rogation Days in a commercial, urban context, gathering up international and national concerns in prayer, and setting forth a vision of an order of charity and peace in national and international affairs:
For amongst the various capacities of doing good that God hath put in our power, one is, that we can succour and relieve the infelicities of the World, by the Charity of our Prayers. By them we can get bread at God's hand for the distressed, as well as give it with our own. By them we can reach the sorrows of the Widow, and the heavily afflicted, and pass through the Walls and Bars of Prisons, to support and comfort the mourning Captive. By them we can fight for the Prince and the Church, when both in danger. By these we can clear the infectious Air in raging Pestilences, and water the dry Furrows when parched with drought, and fortifie our Peace when threatened with the Alarms of War.
Labels: Restoration Rogationtide