Under the vine and fig tree: unity and accord in Restoration Day sermons 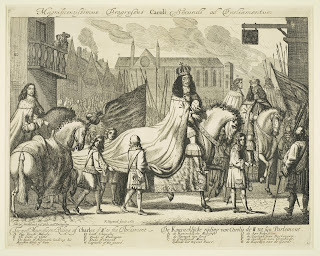 In their sermons for the annual 29th May thanksgiving, two Archbishops of Canterbury (one serving, one future) - the 'Latitudinarian' John Tillotson (1691-94) and the High Church Thomas Secker, described by Ingram, and criticised by some contemporaries, as the "Laud figure of the age" (1758-68) - revealed the extent of the 'unity and accord' which shaped Anglicanism through the 'long' 18th century. The sermons point to a shared narrative regarding the most divisive periods in the recent history of the English church and state - the civil wars of the 1640s and the Revolution of 1688. They also indicate a common theological underpinning to this narrative, concerning providence, the necessity of government, and the blessings of civil peace.

In his 1693 Restoration Day sermon, Tillotson commenced by stating the grounds for thanksgiving, in the words of the official title for the liturgy of the day "the Restoration of the Government after many Years interruption":

this Day is appointed by Authority for an Anniversary Solemnity, in a grateful Commemoration of the great Mercy of God to these Nations, in putting an end to the intestine Wars and Confusions of many Years, in restoring to us our own ancient Government and Laws, and in bringing home, as upon this Day, the rightful Heir of these Kingdoms, to the Crown and Throne of his Fathers.

Secker's 1739 sermon similarly rejoiced in 1660 as the "providential" restoration of the "ancient constitution", bringing an end to the times of confusion:

then did God bow the heart of his people, even as the heart of one man, to recall their exiled sovereign, and re-establish their ancient constitution in Church and State. The merciful and gracious Lord hath so done his marvellous works, that they ought to be had in remembrance ... To have lived in these beginnings of sorrows must have been very dreadful; but how much more, when discord had brought forth its perfect work; had involved the three nations in bloodshed, and the numberless distresses, that belong to civil wars?

Both Tillotson and Secker viewed the Revolution of 1688 as standing in continuity with, rather than being a contradiction of, the Restoration of 1660.  For Tillotson, James II threatened the constitutional order as did Cromwell:

yet it hath pleased God, in scattering those black Clouds, which not long since hung over us, to restore this Day to its first Lustre and brightness; so that we may now with great joy look back upon it, as designed by the wise Providence of God, to make way for the Happiness which we now enjoy under their present Majesties, by whom, under God, we have been delivered from that terrible and imminent Danger which threatened our Religion and Laws, and the very constitution itself of our ancient Government.

For Secker, the Revolution of 1688 "completed" the Restoration:

when the mercy of Providence, again interposing, delivered us; and not only completed, but we hope hath secured to us for ever, the whole blessing of the Restoration, under our present happy establishment.

It is also noticeable how these sermons invoke themes which may not be thought typical of the Latitudinarian or High Church stances.  Tillotson, for example, offers an account of the necessity of government which would become a mainstay of High Church political theology throughout the 18th century:

Government is necessary to the welfare of Mankind; because it is the great Band of Humane Society, the Guard of its Peace, and the Security of every Man's Person and Property; and therefore we are concerned as much as is possible, both to pray for our Governors, and to bless God for them; because without them we should be in a most wretched Condition. Mankind would be unavoidably miserable without Government; Humane Society would presently disband, and all things would run into confusion ... Appointment of Government, to preserve the peace of Humane Society, and by wise and wholesome Laws, to tie up Mens Hands from mutual Injuries and Violence. Upon this all the Comfort and all the Security of Humane Laws does depend. From hence it comes to pass, that (as the Scripture expresseth it) 'We may sit down every man under his own Vine, and under his own Fig-tree, and that there shall be none to make us afraid'. So that if Security is necessary to the Comfort and Happiness of Mankind; then Government is so too: For without this, the Societies of Men would presently dissolve and fall in pieces, and all things would run into Confusion and Disorder.

Secker, on the other hand, urges the moderation of "necessary caution" on Church and State.  Indeed, he includes a critique of the ecclesiastical and constitutional policies of the 1630s, of Laud and Charles I:

First, a zeal excessively angry, for it must be acknowledged, was shewn in the church, against a very provoking sect of zealots: and illegal powers were exercised, to a dangerous degree, in the State; when the bounds of legal power were less clearly fixed.

(We might note this Secker's critique was not unusual in High Church circles.) He continued by emphasising the continuing need for ecclesiastical and constitutional moderation, warning against excessive claims for Church and Crown:

It must remind the governors of the established Church, that rigorous treatment of such as dissent from it, and endeavours to extend their own authority, or influence, beyond reasonable bounds, are methods as contrary to prudence, as they are to religion ...

From the occurrences of the same times, counsellors of princes ought to learn, that the greatest interest of the sovereign and their own is, never to bear hard upon the liberties of the people; for they will restore themselves with dangerous force: never to give them jealousy; never to despise even their less reasonable complaints; but, as far as it is possible, always promote the public good by methods agreeable to the public inclination. And the several parts of the legislature should learn, each to maintain their own privileges with calm resolution; but to abstain religiously from mutual encroachments: for not only the sacred obligation of justice requires it; but experience hath shewn, that when once the inward balance of a constitution is broken, endless disorders are likely to follow.

In Tillotson's account of the necessity of government and Secker's emphasis on the need for moderation in the claims of Church and State, we see something of what Gibson describes:

the Revolution of 1688-9 also demonstrates the inadequacy of the categories of churchmanship that historians have, for the most part, been happy to use.  High Church and Low Church were not exclusive categories of thought and churchmanship.  They were blurred and broad streams within Anglicanism that often merged, overlapped and coincided.

The "ecclesiastical commitment to unity and peace" identified by Gibson was also was to be seen in the thanksgiving shared by Tillotson and Secker for the Revolution settlement. Tillotson contrasted the Revolution's "excellent Constitution" with the years of confusion ended by the Restoration:

We cannot but be convinced, what Cause we have to bless God for that happy Government which we live under, that excellent Constitution, under the gentle Influences whereof we enjoy more Liberty, more Plenty, and more Security from all manner of Injury and Oppression, than any Nation this Day on the Face of the Earth. Therefore with what Thankfulness should we this Day commemorate the happy Restoration of this Government to us, after the miserable Distractions and Confusions of twenty Years, by the Restoration and Return of our banished Sovereign, in so peaceable, and yet so wonderful a Manner, that a Remembrance of it, even at this Distance, is almost still Matter of Amazement to us!

For Secker, too, thanksgiving was to be offered for the profound contrast between the confusions of the years preceding the Restoration and the liberty and order of the Revolution settlement:

Then the majesty of the crown, the honours of the nobility, the privileges of the commons, fell a promiscuous sacrifice, as the church had done before, to enthusiastic fury ... The subverters of lawful authority by force, underwent repeated subversions of their own one by another: the patrons of unbounded liberty sunk under the dominion of absolute tyranny ...

Our sovereign, we are sure, hath the sincerest regard both to our civil and religious rights: his posterity have deeply imbibed the same generous principle : and all, that we can have to fear, must be from ourselves. 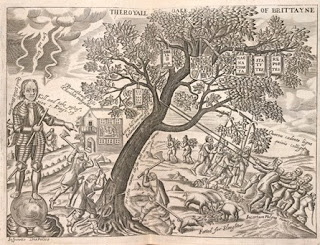 Both sermons demonstrate how the Restoration and the Revolution shaped and gave expression to the 18th century Anglican commitment to civil peace, constitutional order, and ordered liberty. This is a rich tradition of political theology which - with all of the necessary caveats for the injustices inherent to 18th century government and society - continues to offer a prudent, wise, and realistic vision of what means for a society to be "quietly governed", sitting under the vine and fig tree.

(The first illustration is of Charles II at the state opening of Parliament in 1661.  The second is of Cromwell uprooting the ancient constitution.)