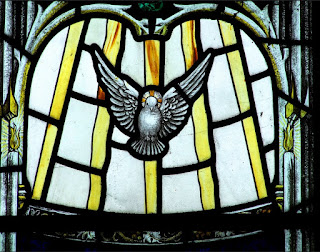 What hath been discoursed upon this argument, discovers the vanity of many men's pretensions to the Spirit.

In a sermon on 'The Ordinary Influence of the Holy Ghost, on the mind of Christians', Tillotson (Sermon CC, Works of Tillotson, Volume VIII) sets out "The more ordinary and gentle influence of the Spirit of God, upon the minds of all those who believe and embrace the gospel". This "ordinary and gentle influence" begins with the Sacrament of Baptism:

In a word, this gift of God's Holy Spirit is bestowed upon all those who by baptism are admitted into Christ's religion; and if it be cherished and complied with, and the blessed motions of it be not resisted and quenched by us, it will abide and continue with us, and produce those blessed fruits and effects which I have before mentioned.

The presence and activity of the Holy Spirit is "commonly very gentle and secret", in language echoing Taylor and later echoed by Secker:

And though this influence and assistance, this conduct and guidance of the Divine Spirit, be commonly very gentle and secret, and do usually work upon us in so imperceptible a manner, that it is very hard, if not impossible, particularly to distinguish between the motions of God's Spirit and those of our own minds, between the immediate suggestions of the Holy Ghost and the dictates of our own reason ; yet we are in general sufficiently assured of it , partly from the effects themselves, but principally from the express promise and declarations of Scripture, that Christians are acted by a supernatural principle, and secretly assisted by the influence of a Spirit above our own.

Challenging the notion that fervent extemporary prayer is a sign of being "governed in an extraordinary manner by particular impulses and impressions from the Spirit of God", Tillotson emphasises liturgical prayer as 'praying in the Spirit':

The Spirit of God is more frequently and certainly in the still voice, than in the high wind and fire, the boisterous passions, and fiery zeal of men. And certainly, he that takes care to put up wise and decent petitions to God, and considers carefully what to beg of him, and asks it in a be coming manner, with faith and true fervency of affection, though in a form, hath much more reason to conclude that he prays in and by the Spirit of God, than he that hath the greatest freedom of extempore effusions.

While claims to the Holy Spirit working in "an extraordinary manner ... ought to be looked upon as fanatical enthusiasm", the authentic demonstration of the working of the Spirit is found "in the graces and virtues of a good life":

And, after all, there is a much better and clearer demonstration, that a man hath the Spirit of God, than any of these pretences; and that is, from the undoubted fruits of the Spirit, in the graces and virtues of a good life, which are visible and manifest in the temper and conversation of a good man; and without these, all pretences to the Spirit of God are but fancy and vain delusions; such men "deceive themselves, and the truth is not in them".

The key theological principle underpinning the sermon is then expounded.  The gift of the Spirit is bestowed upon our natural faculties that we "may co-operate and concur with his assistance. God assists, but we do":

Grace does not destroy nature, nor Divine assistance take away our liberty, but frees us from our bondage; and, as David expresseth it, "enlargeth our hearts to run the ways of God's commandments"; for if God do all, and we nothing, all exhortations and persuasions would be in vain.

This sermon exemplifies the 'Tillotsonian temper' which defined much Anglican piety during the 'long 18th century', a piety which we could trace from Taylor to Tillotson to Secker, and then to, for example, Mant and Laurence.