The Te Deum: an answer to 'What has Athens to do with Jerusalem?' 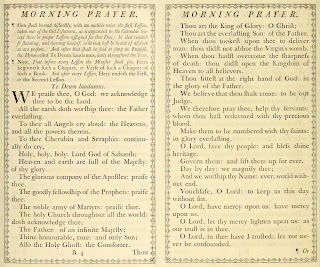 With the easing of the Covid-19 restrictions allowing for a restoration of the normal parish worship schedule, I have been preparing for the return of parish Mattins by reading Mant's Notes (1820).  The Notes assembled commentary on the Prayer Book services from Old High Church sources of the 17th to early 19th centuries.  Reading the commentary on the Te Deum, it is interesting to note how the various sources point to this canticle as as providing an answer to Tertullian's jibe.

To begin with, we might consider how the Te Deum - with its Trinitarian and Christological emphasis - is an appropriate response to the First Lesson from the Old Testament:

The propriety of singing or reading the Te Deum after the first lesson must be evident to every observer. The Scriptures of the Old Testament set before us God's exceeding great and precious promises, the rectitude of his moral government, and his wonderful dealings with his church and people from the earliest times. If we hear these things in a proper temper of mind, they will fill us with devout sentiments of adoration and praise. And to express these sentiments in the most lively and vigorous manner, more suitable words have never been devised than those of this rational and majestick hymn (Thomas Rogers in the early 19th century).

The use of 'Holy, holy, holy: Lord God of Sabaoth' particularly expresses this continuity with Israel, with one commentator describing it as a "paraphrase on that sublime song of the heavenly host, recorded by the prophet Isaiah, vi. 3" (Peter Waldo writing in the later 18th century).  This same point is further emphasised through the words of another commentator (Thomas Secker, Archbishop of Canterbury 1758-1768):

whose acclamations therefore we humbly presume to adopt, as we find them recorded in that lofty description of the prophet. "I saw the Lord, sitting upon the throne, high and lifted up, and his train filled the temple. Above it stood the seraphims: and one cried unto another and said , Holy, holy, holy, is the Lord God of hosts : the whole earth is full of his glory." Is . vi. 1 , 2, 3. Where it must be observed that for "God of hosts" in the prophet, is "God of sabaoth" in the hymn: the latter being the Hebrew word for the former: which both the Greek and Latin of the Old and New Testament having preserved, as comprehending more than could be well expressed by a single term of any other language.

The Te Deum follows the First Lesson from the Old Testament because it declares that the Church's faith is rooted in the Scriptures of Israel, that the God revealed to Abraham and Moses is the Most Holy Trinity, that the God of Israel redeems the world in the Incarnation, Passion, and Resurrection of the Word. The Te Deum, then, gathers up the prayers and praises of Jerusalem over the centuries, fulfilled in Jesus Christ.

It begins with equal majesty and simplicity: "We praise thee, O God, we acknowledge thee to be the Lord." And not we alone, but "all the earth doth worship thee, the Father everlasting": every corner of it having retained some apprehensions of a supreme Ruler; on which is founded that of St. Paul to the Athenians, "Whom therefore ye ignorantly worship, him declare I unto you," Acts xvii.23.

The prayers of Athens "to the Unknown God" are thus also gathered up in the Te Deum and pointed to their fulfillment in the God of Israel, the God and Father of Our Lord Jesus Christ. Tertullian's jibe (and the uses to which it has been put) is answered and refuted daily at Mattins in the praises of the Te Deum.