Rogationtide and the commonwealth: lessons from the Restoration Church? 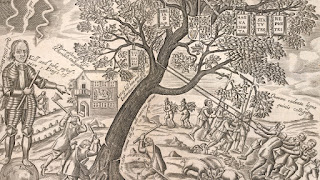 "The solemn daies of Rogation which we observe in the Church of England". So said Jeremy Taylor in Ductor Dubitantium (2.III.IV), published in 1660.  It was a sign of the renewal of the observance of Rogationtide in the Restoration Church, after the long, fallow years of the 1640s and 1650s.  As Taylor would also say to his clergy in Down and Connor in 1661:

Let the people be exhorted to keep Fasting days, and the Feasts of the Church ... ever remembring that as they give but little Testimony of Repentance and Mortification, who never fast.

Prayer and fasting for the flourishing of the land and community had a particular resonance after what the Declaration of Breda had described as "the general distraction and confusion which is spread over the whole kingdom ...  after so long misery and sufferings".  Little wonder, then, that Cosin's 1662 Articles of Inquiry for the Diocese of Durham required the return of the Rogationtide procession and homily:

Doth he, or his Curate, observe the three Rogation days before the feast of our Lord's Ascension, saying the Litany, the ciii. and the civ. Psalm, with the Churchwardens and others that accompany him, in the perambulation of your parish? and, when the perambulation is ended, both he got into the Church with them, and read unto them one of the Sermons set forth and appointed for that purpose?

As yesterday's extract from the 1677 Rogationtide sermon in Norwich Cathedral demonstrated, a sense of the fragility of communal order and well-being was evident in the observance of Rogation Days during the Restoration era, no doubt a result of the trauma of civil wars, the Protectorate and its collapse.  The preacher recalled the "violent tempests" which had assailed Church and State, going on to point to the example of Laud and the Royal Martyr, "the great Archbishop and Martyr ... his late Majesty of blessed Memory".

Recognition of the importance of the observance of the Rogation Days was not, however, restricted to those with obvious Laudian and High Church opinions.  The 'Latitudinarian' Symon Patrick's A Treatise of Repentance and Fasting (1685) opened with the table from the BCP 1662 showing 'Days of Fasting, or Abstinence', including the Rogation Days.  His discussion of fasting referred to the danger to posed to the commonwealth by "old enemies":

when we consider how restless the spirit of sedition and rebellion hath been since among us, and brought us again so near the very same dreadful danger, that we were just upon the point of beholding all order and government over-turned.

As the Restoration era ended, Archbishop Sancroft's 1689 'Instructions to the Clergy of the Church of England' reiterated the observance of Rogationtide amongst the other fasts contained in the Book of Common Prayer:

That they perform the Daily Office publickly (with all Decency, Affection, and Gravity) in all Market and other Great Towns, and even in Villages, and less populous Places, bring People to Publick Prayers as frequently as may be; especially on such Days, and at such Times, as the Rubrick and Canons on Holy-days, and their Eves, on Ember and Rogation Days.

Rather appropriately, it was issued amidst another convulsion, as Church and State were delivered from the designs of James II.  Rogationtide, then, was more than symbolism for the Restoration Church.  It was not just a matter of restoring a tradition from the pre-civil war years.  The Rogation Days embodied a sense of the need for prayer, fasting, and repentance for the good and well-being of the commonwealth.  The "late unhappy confusions" had painfully revealed the fragility of the commonwealth before violent passions and the rejection of the duties and obligations - "ancient right and custom", in the words of the Rogationtide homily - which underpinned the communal peace.  The observance of the Rogation Days, therefore, was a means of securing common life against "the hurt of godly peace and quiet".

In another age of turmoil in our common life, with "godly peace and quiet" rent by passions, when we have lost a sense of the commonweal, perhaps contemporary Anglicans might learn from their Restoration forebears how Rogationtide can recall us to seek and serve the common good.